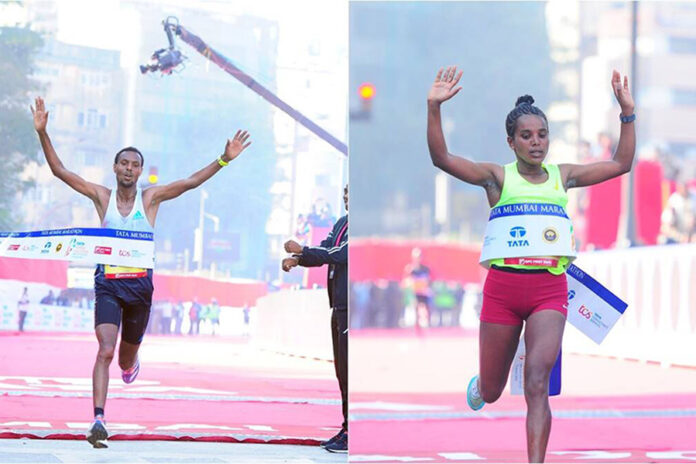 Ethiopia’s Haile Lemi bettered the elite men’s course record by more than 30 seconds, comfortably finishing the race in 2:07:32 to better the record of 2:08:09 set in 2020 by Derara Hurisa while Anchalem Haymanot finished the race in 2:24:15 to better Kenyan Valentine Kipketer’s record of 2:24:33 set in 2013.
Haile and Anchalem took home prize money of $45,000 as well as a course record bonus of $15,000 each. Kenyan Philimon Rono finished behind Haile with a timing of 2:08:44, followed by Hailu Zewdu, who clocked 2:10:23.
Rahma Tusa and Letebrhan Haylay completed an Ethiopian sweep in the women’s event with timings of 2:24:22 and 2:24:52 respectively.
It was a dream debut for Anchalem in the women’s elite race who kept pleading with her pacer to push harder throughout the race. In the women’s race, there were as many as five runners in the lead pack at the midway stage before 2019 champion Worknesh Alemu took the sole lead. She however couldn’t match the drive of Anchalem and Tusa who kept pushing each other till the end.
“This was my first marathon and I won gold. I was nervous regarding the weather and the conditions. Before the start, I didn’t tell myself that I have any hope of winning as the women’s field was very strong but I just stuck to the basics. My whole body was feeling good in the end so I went for the win,” she said.