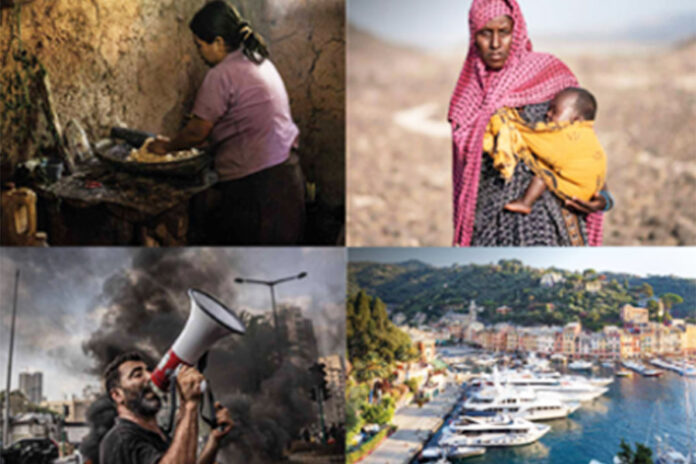 The wealthiest people on the globe who account for only 1 percent of the world population grabbed nearly two-thirds of all new wealth nearly 60 percent of the world’s hungry population reveals a new Oxfam report.
New wealth worth 42 trillion dollars was created to the financial elite since 2020 which in perspective was almost twice as much money as the bottom 99 percent of the world’s population according to the report.
Billionaires have seen extraordinary increases in their wealth. During the pandemic and cost-of-living crisis years since 2020, 26 trillion dollars (63 percent) of all new wealth was captured by the richest 1 percent, while 16 trillion dollar (37 percent) went to the rest of the world put together. During the past decade, the richest 1 percent had captured around half of all new wealth.
A billionaire gained roughly 1.7 million dollar for every 1dollar of new global wealth earned by a person in the bottom 90 percent. Billionaire fortunes have increased by 2.7 billion dollar a day. This comes on top of a decade of historic gains the number and wealth of billionaires having doubled over the last ten years.
The report shows that billionaire wealth surged in 2022 with rapidly rising food and energy profits as 95 food and energy corporations had more than doubled their profits in 2022.
The said corporations made 306 billion dollars in windfall profits, and paid out 257 billion dollars (84 percent) of that to rich shareholders. At the same time, at least 1.7 billion workers now live in countries where inflation is outpacing wages, and over 820 million people roughly one in ten people on Earth are going hungry. Women and girls often eat least and last, and make up nearly 60 percent of the world’s hungry population.
The World Bank revealed that the world is seeing the biggest increase in global inequality and poverty since World War 2. As noted, most countries are facing bankruptcy, with the poorest countries now spending four times more repaying debts to rich creditors than on healthcare. Three-quarters of the world’s governments are planning austerity-driven public sector spending cuts including on healthcare and education by 7.8 trillion dollars over the next five years.
The report shows that taxes on the wealthiest used to be much higher. Over the last forty years, governments across Africa, Asia, Europe, and the Americas have slashed the income tax rates on the richest. At the same time, they have upped taxes on goods and services, which fall disproportionately on the poorest people and exacerbate gender inequality.
“While ordinary people are making daily sacrifices on essentials like food, the super-rich have outdone even their wildest dreams. Just two years in, this decade is shaping up to be the best yet for billionaires a roaring ‘20s boom for the world’s richest,” said Gabriela Bucher, Executive Director of Oxfam International.
Half of the world’s billionaires live in countries with no inheritance tax for direct descendants. They will pass on a 5 trillion dollar tax-free treasure chest to their heirs, more than the GDP of Africa, which will drive a future generation of aristocratic elites. Rich people’s income is mostly unearned, derived from returns on their assets, yet it is taxed on average at 18 percent, just over half as much as the average top tax rate on wages and salaries.
“Taxing the super-rich and big corporations is the door out of today’s overlapping crises. It’s time we demolish the convenient myth that tax cuts for the richest result in their wealth somehow ‘trickling down’ to everyone else. Forty years of tax cuts for the super-rich have shown that a rising tide doesn’t lift all ships just the superyachts,” said the Executive Director, adding, “Taxing the super-rich is the strategic precondition to reducing inequality and resuscitating democracy. We need to do this for innovation, for stronger public services, for happier and healthier societies. And to tackle the climate crisis, by investing in the solutions that counter the insane emissions of the very rich.”
According to new analysis by the Fight Inequality Alliance, Institute for Policy Studies, Oxfam and the Patriotic Millionaires, an annual wealth tax of up to 5 percent on the world’s multi-millionaires and billionaires could raise 1.7 trillion dollar a year, enough to lift 2 billion people out of poverty, fully fund the shortfalls on existing humanitarian appeals, deliver a 10-year plan to end hunger, support poorer countries being ravaged by climate impacts, and deliver universal healthcare and social protection for everyone living in low- and lower middle-income countries.
Oxfam to this regard calls governments to Introduce one-off solidarity wealth taxes and windfall taxes to end crisis profiteering. Permanently increase taxes on the richest 1 percent, for example to at least 60 percent of their income from labor and capital, with higher rates for multi-millionaires and billionaires. Governments must especially raise taxes on capital gains, which are subject to lower tax rates than other forms of income. Similarly, taxing the wealth of the richest 1 percent at rates high enough to significantly reduce the numbers and wealth of the richest people, and redistribute these resources has been said to be essential. This includes implementing inheritance, property and land taxes, as well as net wealth taxes.