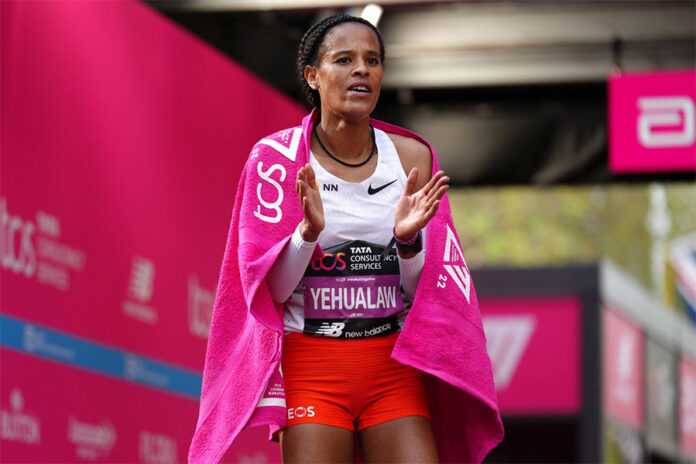 Ethiopia’s Yalemzerf Yehualaw clocked 29:19 at the Valencia 10K Ibercaja to come within five seconds of her own world record, while Kenya’s Weldon Kipkirui Langat won in 26:55 in a thrilling finish against compatriot Charles Langat at the World Athletics Label road race in the Spanish city.
Paced by her compatriots Genetu Molalign, Yalemzerf increased her pace during the second half, covering most kilometers in 2:53-2:54 and reaching 8km in 23:29. After another swift 2:53 kilometer, the Ethiopian was unable to maintain that same cadence over the final kilometer but still held on to finish in 29:19, the second-fastest 10km performance in history.
The 23-year-old Yalemzerf commented she was a bit disappointed for not having broken the world record but satisfied with her brave effort.
The men’s race kicked off at a relatively brisk pace, the opening kilometers covered in 2:38 and 2:39. The pacemaker dropped out just before the 3km (7:57) and the pace decreased slightly, so Lagat and Kenya’s world 5000m silver medalist Jacob Krop moved to the front in a bid to keep the pace alive.
By halfway (13:30), nine men were still in contention for victory.
Despite the annoying headwind over the following kilometers, Krop and Langat managed to maintain a swift cadence in the 2:43/2:45 kilometer range, with Charles Langat always tucked behind them.
Charles Langat set a massive lifetime best of 26:57 while Daniel Kosen took third in 27:01, an 18-second improvement on his career best.
Langat missed out on making the Kenyan team for the World Cross Country Championships, so his next outing will be at the Ras Al Khaimah Half Marathon on 18 February. He’ll then turn his attention to making the Kenyan 10,000m team for the World Championships in Budapest.