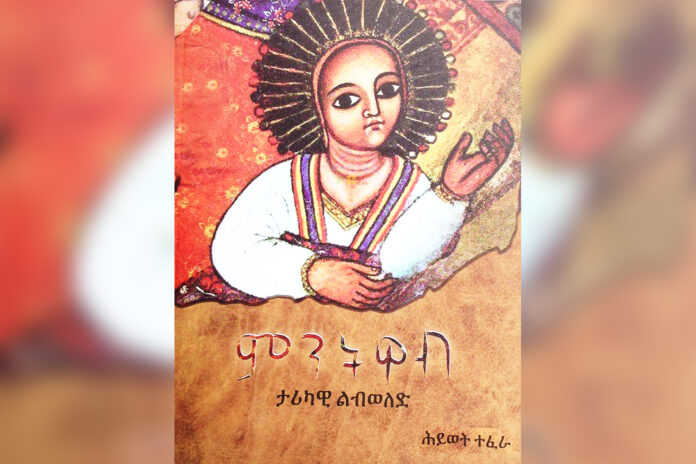 On 25 October 2020 ‘HoHE chapter’ webcasted a discussion on Hiwot Teffera’s “Mentwab” with the presence of the author and showcasing Meseret Abeje and Solomon Teshome PhD as discussants and Desalegn Seyoum as a moderator. Hiwot’s book ‘Mentwab’ published in 2020 as the third publication from her series of writings since her autobiographical note of the 2012’s “Tower in the Sky”. Containing seventeen chapters, the genre of the book “Mentwab” can be categorized as historical novel. As usual, the book amassed admiration for the thriving excellence of the author-Hiwot Teffera. Her audacity was premised on to authoring on women causes with paying all the price of researching from the grass root level in Gondar. To one’s surprise she made several trip to know the dialect, uncover the legend of Mentwab from elders.
Historically, Mentwab (lived between 1706-June 27, 1773)was Queen a native of Quara and the wife of Emperor Bäkafa (r.1721-1730), dominated Gondarine court politics in the reigns of her son Aşé Iyasu II (r.1730-1755) and her grandson King Iyoas (r.1755-1769) . Historical accounts showed us Mentwab managed to build a church and a palace at Qusquam erstwhile in 1725. For the commentator Meseret, Menetwab’s determination to build both palace and church is attributable for her equivocal passion for both religion and politics as well. The palace and the church were located southwest of the city at the foot of Mount Hogg. To her credit, Etegé Mentwab appointed her relatives to important positions that led to the emergence of a political faction named Quaräňoč that struggled against the Wällo Oromo faction of Wubit, the mother of Iyoas. Throughout her tenure as an Empress Mentewab constructed a long U-shaped castle which, completed the major complex of buildings in Gondar. Donald Levine in his ‘Wax and Gold’ underscored that Empress Mentwab Interest in architecture was revived by Bakafa. Mantwab’s castle is noted for bas-reliefs of the Ethiopian Cross, while her other castle at nearby Qusquam is decorated with sculptures depicting saints and animals as well.
Coming back to Hiwot’s book, she was inspired to expose the rare success of women in a palace. The seasoned author- Abera Lema commented Hiwot’s historical novel as a continuum of Paulos Gnogno’s ‘Yetangut Mister’ ( a book on the mother of ‘Emperor Tewordors’). Ever since, no meaningful effort was made to expose women in palace through historical novel. Perhaps, the book demonstrated Inequality, patriarchy, monarchy and what a real life could be imagined in the 18th century imperial palace of Gondar.
For the commentator- Meseret, the Book- Mentwab exceptionally began the narrative from climax of the love affair between Wolete and Tilaye other than the usual tedious chorological narration of History. Appreciably, Mentwab was humane to engage in rare love affair with all her commitment to confirm moral obligation. By virtue of her coronation as an Empress, Wolete will be renamed as “Menteweab’ at later stages of the story. Mentewab’s struggle for recognition has succeeded against the political culture in which Kingship mythology dictates the dynastic claim other than a real decent. Admirably, the author claims that as she tried to fill the gap early childhood of Mentwab through narratives of historical fiction.
Interestingly, Meseret remarked that the story of Abraha was inserted as a side narrative with commendable lesson for the today’s Ethiopia. Initially Abraha came to attend church school and easily cross married in ‘Waldeba’ all the way his career launched to enter castle palaces of Gondar. Though Abraham’s origin was from the then –Tigre province, his identity was not a trivial issue neither for his uninterrupted mobility nor entering the politics of Gondar. Sociologically speaking, it is an exception than a rule for traditional society to determine one’s eventual status through achievement and merit than ascription. One can detect the polarization through identity based politics in the contemporary society as it is became gradual reality from scratch than ever before three centuries.
In his folklore informed commentary, Solomon Teshome exclaims that what was observed during the stories of Mentewab was the discourses between barbarism and civilization, Tewahdo and Kebat theologies, localism and inclusivity, Quaregnoch and Gondarine, peace and massacre, mother and son, stable monarchy and succession rivalry, humane deviance and rigid conformity to social norms . In its entirety, it can be summed as politics in Imperial Gondar was plagued by parochial political culture whose legacy succeeded to this day as a ‘neo parochial political culture’.
In sum, the narrative of Mentewab conveys a lesson for the contemporary Ethiopia to value achievement over ascription, merit over loyalty, humanity over unfounded rigidity. Also, the past is owed with celebratory folklore and locally initiated feminist cause for Architecture and political settlement. I wish for the reader of this piece a good week but urging not to forget the food for thought drawn from Hiwot’s ‘Mentewab’.