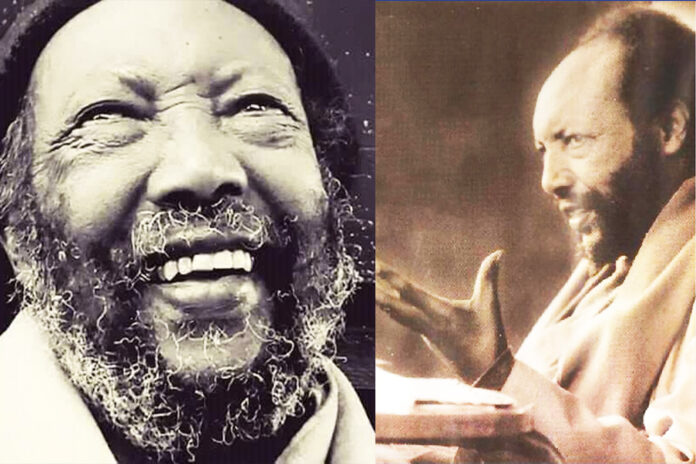 By Eyob Asfaw
On 4 October 2020, the ‘HOHE chapter’ continued the webinar series on the works of Tsegaye Gebremedhin for the third round. Being a last round, the moderator -Wondwosen Adane provoked the discussion with the rare question as to ‘what qualify Tsegaye as a puzzled poet and what departure really made in the literary landscape as observed through his works?’. In reaction to Tsegaye’s critique, the commentator- Michael reacted as Tsegaye’s word power originated from the bitterness feeling he felt and undifferentiated solidarity with his contemporary society.
From its onset, critics and literary families alike characterize the poetry works as a litmus test for Ethiopian social value and pathological test kit for moral decay we are facing as the society. In his 1977 play called ‘Hahu be sedist wer’ (to mean ‘reciting alphabet during infancy’), there is a protagonist Jelu Moro (to mean ‘the Silly ‘Moro’) but ended up to be interpreted differently to the dismay of the author. While Tesgaye meant to immutability of popular voices through subjecting Jelu Moro for non-verbal and silent expression of disappointment. To make matters worse, critics mistook the character ‘Jelu Moro’ to wrongly attribute with Tsegaye’s inability to let his characters speak verbally in artistic manner. On the over-simplification of what authors can face in their defiance to authoritarian leaders, one can remember that former USSR’s Joseph Stalin executed folk poets who sympathized for the then Ukraine. A curious reader can appreciate how Tsegaye stood defiance in the face of Dergue authoritarianism undoubtedly escaped possible sacrifice and torture other than

alleging Tsegaye on unfounded and ill criticism. Appreciably, art creates pathways for rebellion against tyranny, avenues for political understanding and solidarity among coalition builders. Understandably, art teaches us that lives other than our own have value.
As antidote to unfounded criticism, the commentator – Michael Shiferaw contended that, It is none other than a futile exercise to belittle Tsegaye as someone deficient of word power and incapable to meaningfully crafts creative dialogue in his play. In a similar resonance, Abera Lema, a seasoned author and friend of Tsegaye, make a compassionate comparison with what Alexander Pushkin (1799 – 1837) faced a critic in his contemporary Russian literary families. By then, his critique repented for their ill-founded criticism. At last, the critiques builds a consensus that Russians ought to elevate their literary capacity to better understand the works of Pushkin other than lamenting on sophistication of his works.
On the second half of the webinar the discussion delved to uncover as to what narrative of Ethiopia was portrayed through Tsegaye’s work. Michael contends that ‘Hahu wey Pepu’ ( to connote ‘alpha omega of the social and political change’) ‘Esat Woy Abeba’( to mean ‘fire or flower and ‘ Pop Peter’ were illustrative enough to understand what Tsegaye’s constantly conveys his narratives. One can recall that the monologue of ‘Pop Peter’ was a eulogy on an Ethiopian bishop (1892-1936) martyred in defiance to Italian fascism in 1936. For Wondwosen, unlike many other authors, Tsegaye works emphasized on national issues embedded in his clear tendency to engage on grandiose super structural issues other than routine infrastructures of social life. For Michael, in much of his works, Tsegaye doesn’t portray unrealistic utopia without healing structural wounds and redeeming national condemnation.
On another treatment, Tsegaye’s works attested his resemblance to Linguistic Anthropologist for his scheme to uncover the folk cultures through the prism of literature. Tsegaye’s ‘Collision of Altars’ and ‘Oda of Oracles’ are notable to admonish Tsegaye’s anthropological lenses where he interplayed old and emergent east religions and animism. To the shame of authors with shallow understanding on the folk culture’s, Tsegaye’s encyclopedic comparison went afar back 1,500 years to enlist the infamous ‘zorastrianism’ to the indigenous Oromo ‘Geda’. Exceptionally, for Michael, through mediating those play’s in English, Tsegaye meant to convey the intangible cultural treasure for the outside world.
In short, much of Tsegaye’s work are neither studied well by scholars nor understood by the folk peoples. On the webinars, in a similar treatment of Pushkin, the ‘HOHE Chapter’ commentators build a consensus to elevate the competency of reader and audience to understand well what Tsegaye intended to convey through his works.

Digital in 2018: Report shows fast growing internet use in Africa

HR transformation in the new normal

A violin wizard on stage in Addis