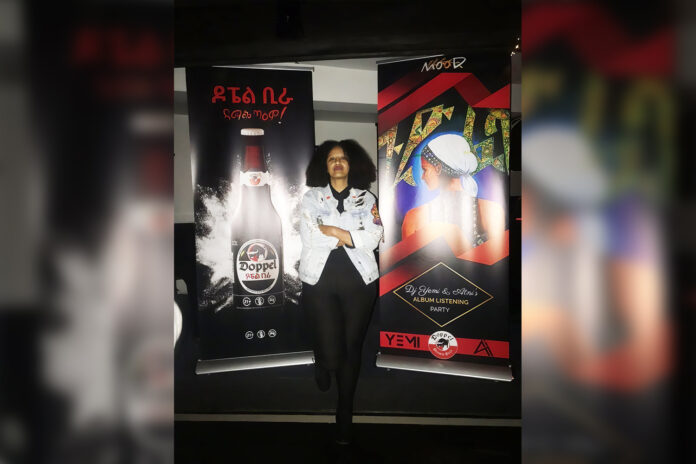 DJ Yemi is a songwriter, producer and a DJ with over a decade of experience in the music industry. She is known for her radio personality at the hype and breakfast show at 105.3 Afro FM. On December 10, 2020 she launched her very first album entitled “Gudfela” at Mood Club. She collaborated with Atnatious Hailu aka Atni a young songwriter and producer. The event was attended by fans and music enthusiasts.
The album launch kicked of by DJ Yemi welcoming and thanking everyone for coming. That was followed by playing every track on the album and giving a brief explanation and meaning behind every song. The event was sponsored and catered by Doppel Beer.
The Album is comprised of Oromfa, Tigrigna, Guragigna genres. Vocalists like Nahom, Bura, Omi, Raheal, Amy and Getachew Hailemariam participated in the making of the album. The album consist a total of 11 songs. A particular song entitled “Hola” was made by 14 elderly people over the age of 70 from the Southern part of Ethiopia with their breathtaking voice. The artists put 5 years into making of the album.
DJ Yemi told Capital that a song entitled “Enat” is her favourite as it has a deep emotional meaning to her concerning her late grandmother. She said “my grandmother is a strong influence to me. She taught me almost everything I know.” She also mentioned that it is relatable to anyone and can be used to refer to one’s mother or country. The 33-year-old artist spoke of working on a 2nd album. And she hopes this album brings joy to every Ethiopian both in Ethiopia and overseas.

Women only event offers a relaxed atmosphere for networking and fun