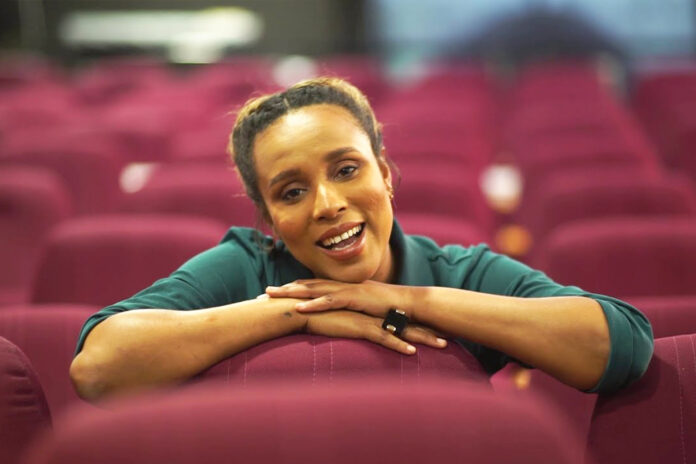 The annual Hullageb arts festival, hosted by Jerusalem’s Confederation House, includes vocalists from the ‘Ethiopian Banai’ family and a play that echoes the community’s protests

Vocalist Tamar Rada feels more Israeli than Ethiopian, but the language, beats, and rhythms of her native land are what move the singer-songwriter.
It all comes to life in her second album, “Adisge,” which will be celebrated December 28, at this year’s Hullageb Israeli-Ethiopian Arts Festival, December 24-30, though the coronavirus pandemic has forced the festival online, and with no visiting artists this year. The performances will be available on the Confederation House Facebook page and YouTube channel.
Hullageb, which means “multifaceted,” is a creation and production of Jerusalem’s Confederation House, whose mission is to create artistic harmony among the more than 100 ethnic groups in Jerusalem. The festival is dedicated to musical, theatrical, and dance creations by artists of Ethiopian origin, with an emphasis on the artists’ dialogue with surrounding Israeli culture and the influences from Western and African art. Decades have passed since the large influx of Ethiopian immigrants to Israel, and many of the younger artists performing this year do not have the same memories as their elders. making the show into more of an Ethiopian-Israeli meld.
“I almost don’t remember Ethiopia,” said Rada, who came to Israel with her family on Operation Solomon, when she was not quite 4 years old. “I’m much more Israeli, but the culture in our house was Ethiopian.”
“Adisge” is that Ethiopian-Israeli mix come to life, with songs that Rada composed to words by Israeli poets David Avidan, Yehuda Amichai, and Eli Eliyahu. Her own original works feature as well, playing with Hebrew, slipping in some Amharic and embellished with her love of African and electronic music.
“I don’t have control over it, it takes over me, it just goes there,” she said of her sound.
Rada and the Tamarada Band are slated to perform on Monday, December 28 at 9:00 p.m.
Music has always been part of Rada’s life, brought to her from her father, who always sang at home, and played his cassettes and video tapes of Ethiopian jazz and fusion as the background to impromptu Rada family dance parties on Friday afternoons.
“We only spoke Amharic in the house, Dad didn’t let us speak Hebrew at home,” said Rada. “He wanted us to speak Hebrew perfectly outside, but to never forget our Ethiopian language and culture.”
During a post-army trip to Mexico, Rada was unexpectedly pulled onstage for a spontaneous performance. The audience’s response awoke a desire in her to sing professionally.
She studied at Israel’s Rimon School of Music, having never learned music notes or studied voice, and was sure that each year would be her last.
She struggled to find her sound, wondering whether she should lean toward artistic independence or try to find fame via the type of music popular on televised singing contests.
“How do you start,” she asked. “Do you go indie or reality?”
It was her instructor Ariel Horowitz, son of legendary singer-songwriter Naomi Shemer, who helped guide Rada, now 33, on her singing and songwriting path. He was the one who encouraged Rada to use some Israeli texts and add her own vibe, “something tribal from her past.”
Rada has several singers in her family including her brother, who sings professionally, and her cousin Ester Rada, who will kick off the festival on December 24.
“I call us the ‘Ethiopian Banai family,’” she said. “Music and singing are part of us.”
Other Hullageb performances at the festival, marking its 11th year, include bass player Yossi Fein with Aveva Dese, Oshi Masala and Adoniya, Abatte Barihun and the Tesfa Ensemble, actor-dancer Tzvika Iskias and choreographer-dancer Ofra Idel; dance-hall artist Ayalew with his first album; Dege Feder and the Beita Dance Ensemble; former members of the Idan Raichel project; vocalist Avi Wogderess-Vasa; and bass player-producer Yankele Segal.
The festival also includes two original productions by the Hullageb Theater Ensemble, including “Sand Stories,” a play without words that uses animation, clowning, music, and movement, set for Friday, December 25 at 12 p.m.
The play tells the story of a girl drawing in the sand, whose drawings become animated characters — shown on a screen that serves as the play’s backdrop — acting out their own story, and are then erased.
The other performance is “The Mark of Cain,” a minimalist play that echoes the anger and protest of the members of the Ethiopian community who have experienced racism in Israeli society.
The play tells of a family with a social stain, whose father decides to return to Ethiopia, as the mother and three children find themselves descending into crisis. It will be performed Wednesday, December 30 at 7:00 p.m.
Both plays are directed by Moshe Malka, who is not Ethiopian, but has been directing actors of Ethiopian descent for the last 20 years.
“I don’t like to tell the stories of Ethiopians,” said Malka. “I prefer telling the story of a person. We live enough with separations in our society; you have to present the conflict, but it’s not the most important thing.”
“After 20 years of working with Ethiopians, I’m happy that the best thing I can do on stage is to not think about who they are — they could be Chinese or Indian as far as I know, they’re people and where they’re from doesn’t really matter,” said Malka.
It is an idea that jibes with Tamar Rada’s upbringing, she said.
“Dad emphasized that we were Ethiopian, but he wanted me to be Israeli outside the house,” said Rada. “‘You’re Tamar Rada, a Jew, and Israeli from Ethiopia. You are who are. You’re who’s interesting, not where you came from.’ That’s my hope, and my energy.”

(The Times of Israel)