Poetry Africa Festival celebrates 25 years under the theme ‘Unmute: Power to the Poet’ 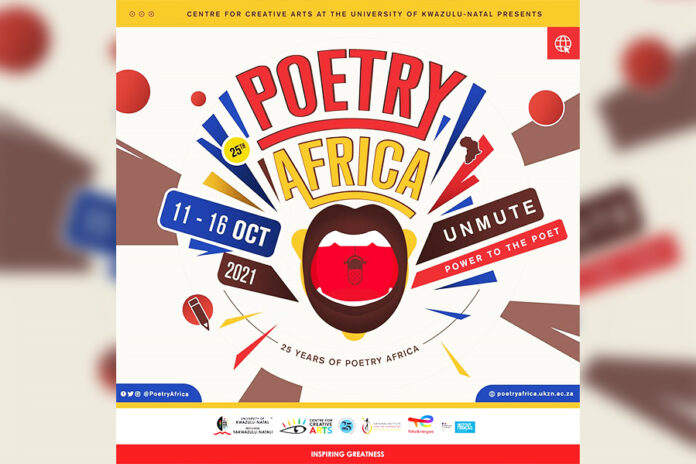 During a pandemic, we occupy a digital highway in which we can get lost in algorithms generated for us. Here, the poet’s role is to help us persevere. Poets can inspire with us their power to show us a different perspective. Therefore, the focus during this year’s festival is ‘Unmute: Power to the Poet’.
Poetry Africa offers a stage to well-established and beginning poets and gives audiences an overview of modern poetry’s new developments and current topics. For the 25th year in a row, the Poetry Africa festival in Durban sets the stage for poetry with a curatorial focus on quality, variety, renewal, and reflection.
One can expect over 35 poets during the six-day programme. Their offerings will be presented over five slots daily and feature performances, online engagements, competitions, book launches, seminars, and workshops.
The festival is also running three competitions that are currently open for submissions: Open mic competition, schools competition and Slam Jam competition.
South African poet, playwright and producer, Siphokazi Jonas will be the featured poet during the 25th Poetry Africa Festival presented by the Centre for Creative Arts at the University of KwaZulu-Natal from 11 to 16 October 2021. Poet Dr Stella Nyanzi, a multiple award-winning medical anthropologist, specialising in sexual and reproductive health, sexual rights and human sexualities in Uganda and The Gambia, will be delivering the keynote speech during the opening of the festival on Monday 11 October at 11 am.
Featured poet Jonas is a storyteller, and ordinary lives fuel her work in poetry and theatre that has been featured at numerous poetry sessions and festivals around the country. Her experience of growing up in Komani, in the Eastern Cape, during the transition years of South Africa’s democracy, has an ongoing influence on her stories. Her work engages questions of faith, identity, gender-based violence, cultural and linguistic alienation, black women in rural spaces, and the politics of everyday lives.
She also produced four one-woman poetry shows in Cape Town and Johannesburg. Her most recent stage production, #wearedyinghere, was performed at Artscape Theatre and Joburg Theatre to positive reception. The production was adapted into a short film and has been screened at numerous international film festivals and will also screen during the Poetry Africa Festival.
“Both Stella Nyanzi and Siphokazi Jonas represent the brand of strong women voices who have been a feature of the Poetry Africa festival for a quarter of a century. They are fearless and unambiguous in letting their voices inspire hope. The poems give agency and impetus to the continued struggle for social justice,” says Siphindile Hlongwa, curator of the Poetry Africa Festival.