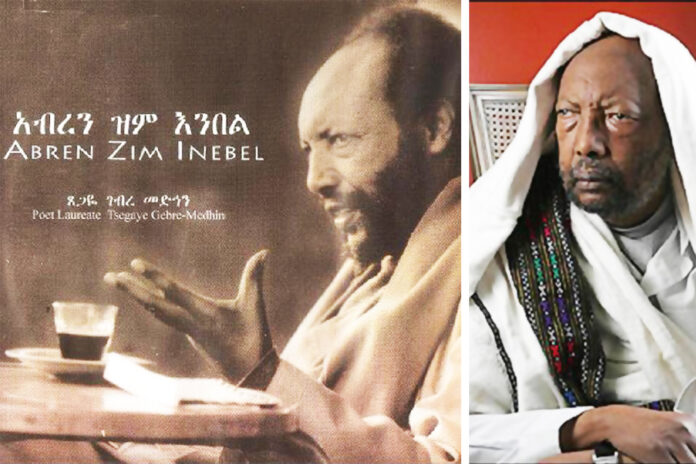 By Eyob Asfaw
On Sept 13, 2020 ‘HOHE Chapter’ as trailblazer of promoting literary culture held an online memoriam discussion on the life, poetry and script plays of the late Laureate Tsegaye Gebremedhin. Being moderated by the renowned Wondwossen Adane, slotting Architect Michael Shiferaw and Desalegn Seyoum as commentator of the works of Tsegaye. The ‘HoHe chapter’ webinar conveys the death of Laureate Tsegaye in a decade ago was not an individual affair for which the nation would eventually easily relieve from the grief. However, many forget that Tsegaye had a forgotten story which deserves to be told. Michael
From his early childhood, Tsegaye was remembered to recite before the Emperor Haile Selassie on the occasion of Imperial tour to the regions. Being born and raised in Ambo on August 17, 1936, his life witnessed as he unfailingly lived for literary arts until his death on February 25, 2006 in Manhattan – New York. His biography conveys us his literary engagement was not discontinued from the moment he wrote his first play when he was fifteen all the way to his advanced scholarship to various European theaters in 1959. Also when he became director of the national theater in its golden age he was observed to change the dynamics of Ethiopian Theatre.
Laureate Tsegaye Gebremehin is legendary poet and playwright deserving the ultimate remembrance among the literary community and artists alike than a mere mourning. Once, Wendy Laura Belecher, in the article appeared via the Ethiopian Observer appeared on October 1998 noted that “ No living person more symbolizes than this poet and playwright”. Moreover, Belcher commented that “Tsegaye is devoted to an African reading of the West and an Ethiopian reading of Ethiopia” by way of stressing his exceptional quality.
Coming back to the discussion on the ‘HOHE Chapter’ webinar, Michael audaciously rebranded Tsegaye as ‘Mistergnaw Balkine’ (to mean ‘the secret puzzled poet’). In its appraisal, the literary culture of puzzled poems were well observed within the sociologist- Donald N. Levin’s book called ‘Wax and Gold: Tradition and Innovation in Ethiopian Culture’. Levine emphasized that Ethiopia’s ‘sam-ena warq’ (to mean ‘Wax and Gold’) refers to a number of poetic figures which embody this twofold meaning. Levine contends that the use of such figures distinguishes the Amhara equivalent of true poetry from ordinary verse, in which everyday language is merely embroidered with verse and rhythm. For Tsegaye, it is a leisure other than burden to convey message in his puzzled poems, by way of keeping dual imagery consistent throughout the stanza. His work undoubtedly poses habesha’s excellence in state of the art. By and large, Tsegaye is anatomy of the Ethiopian cherished literary tradition of Wax and Gold (puzzled poetry).
Desalegn brought his insightful commentary on plays and poems. In his commentary, Tsegaye was characterized as his pen would be better sharpened during political transitions. In his opinion, Tsegaye optimizes the short lived privilege of freedom speech to be exercised within the window period of political transition. Reference being made to the 1974 brought ‘HaHu be Sidist Wor’(to mean ‘reciting alphabet during infancy’) and the 1991’s ‘HaHu wes PePu’ (to connote ‘alpha omega of the social and political change’. ‘Poets are prophets of their Society!’ in the words of Wondwosen Adane. For Desalegn, Tsegaye was cherished for overriding time and space in his works by characterizing his pilgrim of prophecy. Tsegaye’s prophecy of abortive and saboteur mentality of the Ethiopian society was narrated in the play and poems. To our surprise, his characterization of the Ethiopian political society is works to this day. Undoubtedly, no political commentator denies how the political elites engages on trivial interaction and the mob justice of social groups in a post 2018 political transition against the hopeful aspiration we have.
In sum, we can say that there is no real poet without philosophizing and prophetic utterance. But Tsegaye will be remained to remember for showcasing both ‘poet philosopher’ and ‘poet prophet’. Lastly, I wish a good week for the reader of this piece but urge not to forget the weekly food for thought ‘Tsegaye is literary guru deserved to be a national icon!’

Some pensive over Skylight Hotel’s impact