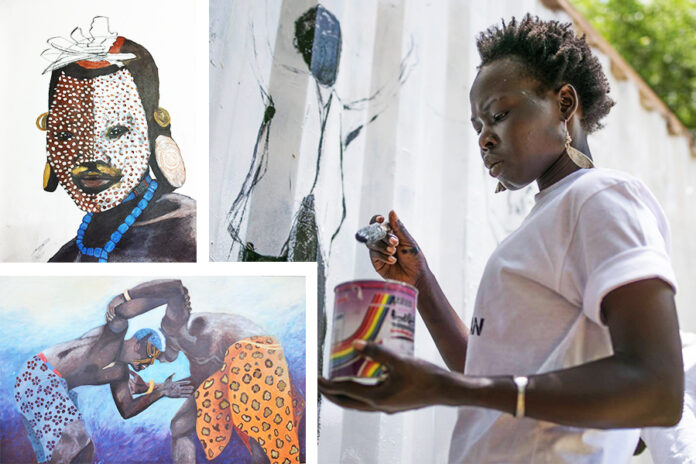 Abul Oyay Deng Ajak is an artist, a painter, a curator, who gravitated towards art from a young age.
She is not only committed to showcase her work but also that of other upcoming artists, especially women artists from across the region, in the world’s youngest nation.
“The interesting thing about art is that it’s a process. So, it’s not like one day I just woke up and became an artist. My father encouraged me to do something more general like a business, so I ended up doing International Business but also, on the other hand, he’s the same person who has always encouraged me to paint. He’s like ‘this is a talent but also have a course,’ so I think the person that really encouraged me a lot was him. Like, every time he travelled, he came back with brushes and paint and things like that and I appreciate that”, said Abul Oyay Deng, Painter, Curator and Gallery Owner.
Abul was born in Ethiopia in 1986 but when war erupted there, she was separated from her mother and came to Malakal in South Sudan with her paternal grandmother who was a big influence on her.
Women, therefore, are a constant theme in her body of work.
“I was raised by women, specially growing up, of course we know the story of South Sudan. All the men were in the battlefield. So, at the time my father was never with us, you know. It’s a subconscious thing. I’ve been raised by very strong women”, she says.
Abul attended university in London and the availability of art supplies fueled her passion to work harder on her talent.
Her first exhibition took place in Juba after South Sudan declared independence in 2011.
For the past seven years, Abul has transformed into a serious and commercially viable artist.
Curating other female artists is an issue close to her heart, though numbers remain low.
“Human beings are creative. Women are very creative, but I think when I came here there were very few of them. So far, I think there are five women artists that I curate here. Art in Sudan was generally looked at as a male thing. Spaces like this truly allow women to explore their talent” concludes Abul.
The artist also works as Director of Museums, Culture and National Heritage in the Office of the Vice President.