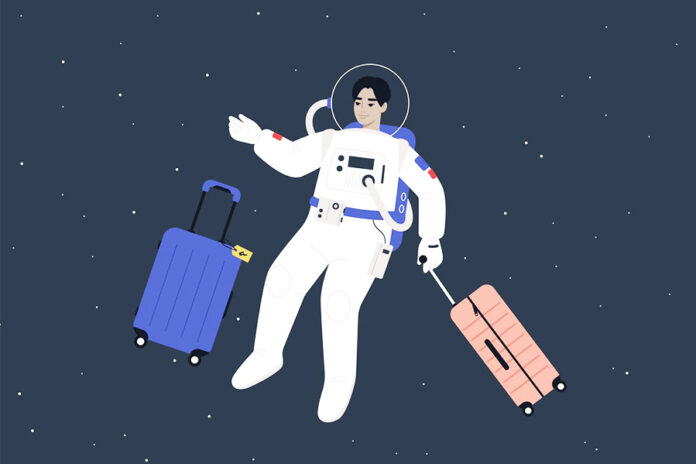 With space tourism now a reality, will civilians travel to space, and when? Last June, billionaires Jeff Bezos and Richard Branson each took a suborbital flight in their respective supersonic rockets, launching a new era of space travel, where a ticket to space is available to anyone who can afford it.
It’s been a momentous month for space-faring billionaires. On July 11, British entrepreneur Sir Richard Branson’s Unity “rocket-plane” flew him and five fellow passengers about 85 kilometers above Earth. And this week, Amazon founder Jeff Bezos’ New Shepard capsule reached an altitude of 106km, carrying Bezos, his brother, and the oldest and youngest people ever to reach such a height. Passengers on both flights experienced several minutes of weightlessness and took in breathtaking views of our beautiful and fragile Earth.
Both flights created an avalanche of media coverage and brand recognition for Branson’s Virgin Galactic and Bezos’s Blue Origin. There is renewed anticipation of a lucrative commercial space tourism industry that could eventually see thousands of paying passengers journey into space.
This year marks 60 years since Soviet cosmonaut Yuri Gagarin became the first human in space. Since then, almost 600 trained astronauts have gone into outer space, but very few people have become space tourists. The first, US engineer Dennis Tito, paid a reported US$20 million to spend six days orbiting Earth in the Russian section of the International Space Station in April 2001, after three months’ training at Russia’s Star City complex. He was followed by a handful of other very wealthy “orbital tourists”, most recently Cirque de Soleil founder Guy Laliberté in 2009, whose ticket reportedly cost US$35 million.
On July 20, the anniversary of the moon landing, Jeff Bezos is setting off on his very own quick trip into space, eight days after Richard Branson and a few months before Elon Musk. This band of billionaires is supposed to be just the beginning of the space tourism. Branson’s company, Virgin Galactic, has already sold 600 trips to the edge of space at a cost of $250,000, according to reports.
From a journalistic perspective, one could leave it at the level of the newsworthy, report on the progress of private space travel and log rocket launches in ever shorter succession: The birth of an all-inclusive tourism of a different kind. Or one could set genre-specific accents. The tabloids could write about three rich boys, their childhood dreams and Star Trek fantasies.
Dieter Schnaas, Chief reporter and author at the German business magazine “WirtschaftsWoche” stressed that finer newspapers’ feature pages could darkly recall the fate of Icarus and measure the fine line between cockiness and foolhardiness. Or they could tell a story of aviation’s decline, from the heroic explorations of the Lilienthals, Gagarins and Armstrongs to the ready-made adventures of the “Bezos” and “Bransons” – with a view from the panorama window.
According to Dieter Schnaas, Business editors, for their part, could retell the history of the transatlantic flight. Their narrative would range from the first crossing (1919) to the exclusive premiere flight of Lufthansa’s “Super Constellation” (1955) to the 300-euro offers for everyone.
Theirs would be a history of the successive cheapening, marketization and democratization of technology. Future section editors could ask: Will half of humanity possibly fly to Mars in 2121, just as half of humanity flies to New York today (at least used to)? One would perhaps like to read some of this. Instead, we have been served up a steady diet about the “commercialization of space travel,” “billionaire madness” and the like.
Some observers don’t even seem to know what to find more obscene. Should it be the ticket price? Or the testosterone levels of three aging white men? Their because-I-can mentality or the damage to the world’s climate? The pointlessness of their space excursions? In short, three boys hanging out their private parts in symbolic form, to see who can go the furthest?
Here is one crucial question. How much is $250,000 these days? What if, as Alexei Bayer, Senior Editor at The New York Times suggest, we go at it in a sociologically colder and economically more sober manner? Let’s consider the ticket price, for example. So what about paying $250,000 for a few minutes of weightlessness and an astronaut’s view?
Yes, that’s a lot of money. Of course, that amount is downright cheap – if and when you consider that a private trip into space seemed unaffordable, even impossible, just ten years ago. Perhaps most significantly, how much money is that really, when a small 38-square-meter apartment in Cologne costs about the same nowadays?
Back in 1933, the often visionary French sociologist Georges Bataille published a short text entitled “The Notion of Expenditure”. He pointed to “the principle of loss” as the primary driver of every economic culture. Luxury, mourning ceremonies, magnificent buildings, games, wars and cults, according to Bataille, are not subject to considerations of utility. They simply have their basis in loss, i.e., “their purpose in themselves.”
Bataille highlights that competitions can often involve “insane sums…wagered in the form of bets.” In indigenous cultures, costly gifts and offerings stand at the beginning of all economy. Because they include an obligation to give in return, Bataille argues that the process of exchange “has its basis in a process of squandering, from which a process of acquisition then develops.”
In a free society, these issues should be discussed and criticized – just as Bezos should be criticized for shortchanging his employees, or Musk when he goes crazy on Twitter again, or Branson when he reaches for his smartphone in his tax haven to plead with the British government. Depending on your perspective, the three billionaires can be criticized for their irrational expenditure of resources, their testosterone and their excess energy.
But, in the end, who knows? Their space adventurism may be actually based on a business model. It may even end up serving science, at least in the case of Musk. Instead of reveling in being hyper-judgmental, we should leave room to consider the possibilities.