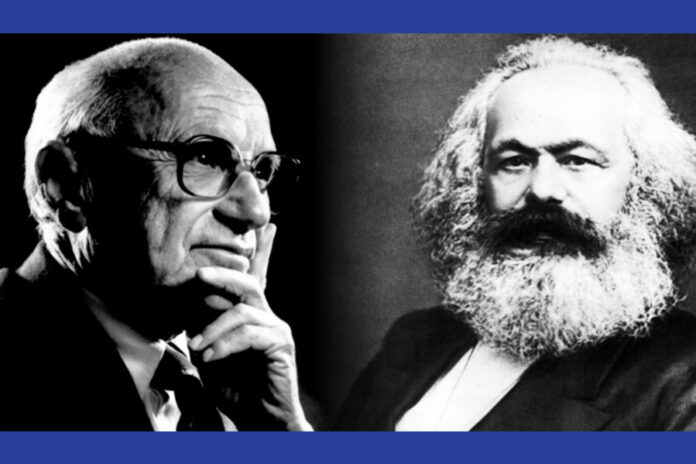 Milton Friedman stated that presumably, the individuals who are to be responsible are businessmen, which means individual proprietors or corporate executives. In a free-enterprise, private-property system, a corporate executive is an employee of the owners of the business. He has direct responsibility to his employers. That responsibility is to conduct the business in accordance with their desires, which generally will be to make as much money as possible while conforming to the basic rules of the society, both those embodied in law and those embodied in ethical custom.
Of course, in some cases his employers may have a different objective. A group of persons might establish a corporation for an eleemosynary purpose, for example, a hospital or school. The manager of such a corporation will not have money profit as his objective but the rendering of certain services.
Milton Friedman adamantly argued that market failures can be fixed. If Karl Marx wished for the rapid demise of capitalism, Milton Friedman’s aim was to celebrate capitalism. In particular, he wanted to get rid of government interference in markets. He acknowledged problems with markets, but he thought a set of once-and-for-all institutional innovations could solve almost all of these problems.
Steve Denning of Forbes magazine stressed that Milton Friedman believed that most regulatory policy was captured by those it ostensibly regulates. Marx and Friedman may not be so far apart here; Karl Marx might want to substitute “created” for “captured.” Therefore, Milton Friedman favored only a minimum of regulation, with no discretionary tinkering to meet problems of monopoly and externalities such as pollution.
Steve Denning noted that in Milton Friedman’s view, a few regulations, such as land-use zoning, well-constructed property law and perhaps a few regulations governing waste disposal and natural monopolies, industries, such as piped water delivery, that are most efficient with a single producer, could create permanent institutions to deal with most market failures.
To solve the problem of paying for public goods such as policing and defense, as well as to mitigate the poverty generated by market outcomes, Friedman wanted to institute a simple “negative income tax.” This tax regime would generate revenue for the government while relieving poverty by guaranteeing an income floor above the level of abject poverty.
Bernard Wasow, Professor of economics at New York University argued that Milton Friedman is a product of the Great Depression. A product of the Great Depression, Milton Friedman particularly disputed the Keynesian claim for active countercyclical policy. A steady rate of growth of the money supply was all that was needed to stabilize the economy. In complete contradiction to Karl Marx, Friedman believed that government, not capitalism, produced business cycles.
According to Bernard Wasow, if monetary policy were driven by simple rules rather than the judgments of policy makers, market economies would grow steadily. He think of Milton Friedman as an “economic deist” who thought that relatively few government interventions would be sufficient to set the economy running unmonitored, like clockwork. Build the capitalist clock, wind it up, and then let capitalism run without further intervention.
If history has not been kind to Karl Marx’” iron laws,” it has not exactly shined a favorable light on Friedman’s hostility to public policy. Arguably, the best evidence for this is in what happened in Eastern Europe after central planning collapsed in the 1990s.
Bernard Wasow further noted that the photographs of Milton Friedman that replaced those of Socialist saints in Eastern Europe did not stay on walls for long. In every modern economy, it appears that active government intervention is unavoidable. Similarly, the few attempts to run a passive macroeconomic policy from monetarist principles have not led the way to more such attempts. Active policy to mitigate the business cycle is ubiquitous in large economies.
Branko Milanovic, Professor at the City University of New York stressed that as disappointing as it may be to libertarians, excluding the sizable corps of true believers, immune to evidence, a complicated society needs a lot of complicated, active public policy, both microeconomic and macroeconomic. In spite of his shortcomings as a guru on government’s role in capitalism, Friedman’s work has left a legacy. His celebration of freedom of choice in a market economy highlights how much people value this freedom. For example, many on the left want to meet the challenge of climate change through a flood of new restrictions and regulations governing production and consumption.
At the time of his death, Milton Friedman was agnostic about climate change, preferring perhaps not to admit a new, glaring market failure. But if he had lived long enough to favor any kind of active climate policy, he surely would have favored market-based interventions such as a carbon tax over regulation. Such a tax would push decision makers throughout the economy, not only those who buy new cars, for example, but those who build the factories where cars are made, to economize on the use of carbon-based energy.
More important than the superior efficiency of such a policy, a market-based intervention would provide greater freedom. It would leave individuals to decide for themselves how much and how to economize on the use of carbon-based energy.
Milton Friedman is onto something essential when he underlines the importance of people making their own decisions. His celebration of markets as interactions that are autonomously resolved by participants is Friedman’s major contribution. If his dream of inactive government has not been supported by history, his attention to the importance people attach to autonomy, and the social cost of restricting it, is as important as ever.
To conclude, neither Karl Marx nor Milton Friedman made lasting contributions to economic theory. However, anyone who tries to understand and to intervene in today’s political economic processes had better pay attention to what they said. We cannot understand modern political economic developments without bringing to bear Karl Marx’ understanding of the role of social class. Nor can we understand them without Milton Friedman’s appreciation of markets as expressions of freedom.

The economics of electric cars and biofuels