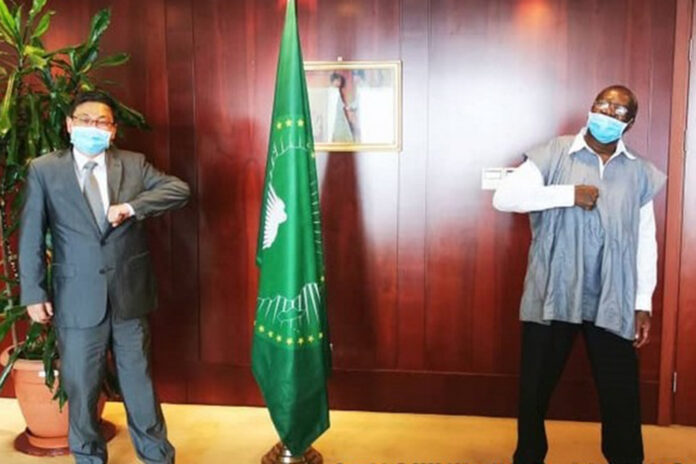 A spike in racial discrimination in China prompted by fears over the Covid-19 pandemic has led some in the African diapora to reevaluate the relationship between the African continent and Beijing.
Over the past week, footage has been published on social media showing Africans in the southern Chinese city of Guangzhou being evicted from their apartments, refused access to hotels or restaurants, and being forced to sleep on the streets. These incidents occurred ostensibly as part of efforts to halt the spread of Covid-19 in the country but have led to a diplomatic crisis between Beijing and African nations.
The images sparked outrage across Africa, with the hashtag #chinamustexplain trending on Twitter and Chinese ambassadors being summoned by irate officials in Nigeria and Ghana, to name but a few. African ambassadors in China wrote to the foreign minister of China over what they called the “stigmatisation and discrimination” being faced by their citizens.
Following the reported incidents of brutalities and related injuries allegedly inflicted on Africans in Guangdong province in China, the Deputy Chairperson of the African Union Commission, Kwesi Quartey called the Chinese Ambassador to the African Union, Liu Yuxi, to the Commission for a discussion on how the matter would be resolved.
‘Quartey informed Yuxi that given the closeness of the relations between China and Africa, the reported incidences were clearly unacceptable,’ according to a statement from the AU.
In his response, ‘Yuxi reiterated the immense value China places on its relationship with Africa and China’s commitment to protecting and developing this relationship. He registered the regret and embarrassment that the incidents have caused China. Yuxi recounted steps the Government of China has taken, and continues to take to restore calm and to protect the safety, security and dignity of the African population in China,’ the statement reads.
Yuxi also informed the Deputy Chairperson that, the Chinese whose social media post caused the unfortunate incident has been arrested. Also, law enforcement personnel exerting excessive force have been reprimanded and cautioned to exercise restraint whilst discharging their duties. He also mentioned that two hotels have been secured for the affected Africans and the cost would be borne by the Chinese Government. Furthermore, seized passports and personal belongings have been retrieved and handed over to their rightful owners, Yuxi added.
‘Clearly this matter has caused grief, pain and humiliation to all Africans,’ a tweet reads.
‘Africa values its relationship with China but not at any price. Further act of brutality meted out to Africans will not be countenanced by the African Union and indeed all Africans,’ another tweet reads.
Beijing initially chose to dismiss and deny the accounts of unfair treatment.
“We do not have discrimination in China against African brothers,” foreign ministry spokesman Zhao Lijian said on Monday. He then accused the United States of trying to exploit the issue to undermine China’s relations with Africa. The statement came after a group of African ambassadors in Beijing expressed concern over numerous reports of Africans being forced into quarantine or being singled out for scrutiny by health authorities.
The tone then appeared to soften, as China’s Foreign Minister Wang Yi spoke on the phone with Moussa Faki Mahamat, the chairperson of the African Union Commission, with Wang assuring Mahamat that measures were being taken to improve the situation of Africans in Guanghzou. Mahamat later described the relationship between China and Africa in a tweet as being “strong and brotherly”. It now appears that most of the displaced Africans in Guangzhou have found places to stay and that city authorities are engaging in consultations with the African community as well as academics to repair the relationship.
On Monday, ambassadors and envoys from more than 20 African nations met with China’s assistant minister of foreign affairs, Chen Xiaodong. Chen vowed to lift the health measures aimed at African residents except for those with confirmed cases of Covid-19, AFP reported.
Over the past 20 years, China has become an increasingly influential presence on the continent as Africa’s natural resources have helped fuel the country’s meteoric economic development. According to data from Johns Hopkins University, the Chinese government as well as its banks and companies have lent some $143 billion to Africa between 2000 and 2017, often to finance large infrastructure projects. Recent estimates put the number of Chinese citizens currently residing in Africa at one million while some 200,000 Africans live and work in China.

Pragma partners with Specific Tools & Techniques Ltd. for the Supply...

Having no capable goalkeeper appears not a problem to Abraham Mebratu