HomeLocal NewsAfrican economy will lose up to $200 billion in the next nine...
Local News 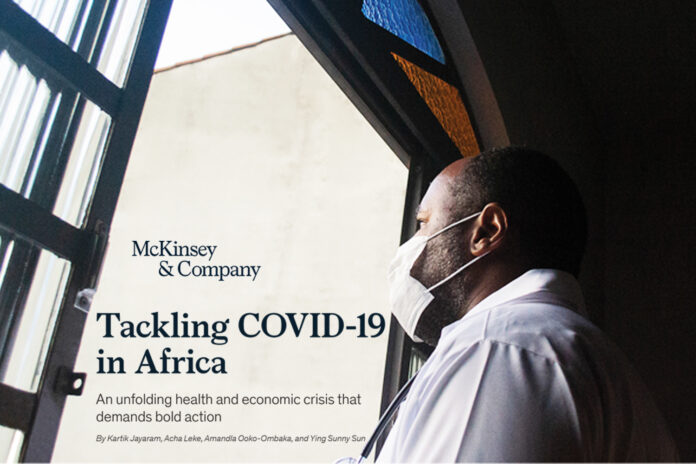 An initial analysis by McKinsey, a US management consulting firm, predicts that the African economy will lose between $90 billion and $200 billion over the next nine months alone.
The research oversees four scenarios that show that African GDP could shrink by between 3 to 8 percent in 2020 that translates into a loss of between $90 billion and $200 billion for African economies.
Although according to the projects that things are going to get worse particularly if containment measures do not prove effective, in the absence of major fiscal stimulus, this pandemic is likely to tip Africa into further economic contraction in 2020.
To gauge the possible extent of this impact, McKinsey modeled four scenarios for how differing rates of COVID-19 transmission – both globally and within Africa – would affect Africa’s economic growth.
Even in the most optimistic scenario, McKinsey project that Africa’s GDP growth would be cut to just 0.4 percent in 2020 – and this scenario is looking less and less likely by the day. In all other scenarios, McKinsey project that Africa will experience an economic contraction in 2020, with its GDP growth rate falling by between five and eight percentage points. The first scenario is set as ‘contained global and Africa outbreak.’ In this least-worst case, Africa’s average GDP growth in 2020 would be cut from 3.9 percent (the forecast prior to the crisis) to 0.4 percent. This scenario assumes that Asia experiences a continued recovery from the pandemic, and a gradual economic restart. In Africa, McKinsey assumes that most countries experience isolated cases or small cluster outbreaks – but with carefully managed restrictions and a strong response, there is no widespread outbreak. And the worst case scenario is ‘Resurgent global outbreak, Africa widespread.’ In this case, Africa’s average GDP growth in 2020 would be cut by about eight percentage points, resulting in a negative growth rate of -3.9 percent. Globally, McKinsey assumes that Europe and the United States continue to face significant outbreaks as China and East Asian countries face a surge of re-infection. In addition, significant outbreaks occur in most major African economies, leading to a serious economic downturn.
The report recommended that governments, the private sector and development institutions need to double down on their already proven resolve and significantly expand existing efforts to safeguard economies and livelihoods across Africa.
The report further suggests as a framework for near term action by governments, the private sector, and development institutions to mitigate this impact. These actions are drawn from a global scan of economic interventions already being implemented or considered, and recent discussions with public- and private-sector leaders across Africa.
However the report suggests that in many countries, there is an opportunity to take bolder, more creative steps to secure supply chains of essential products, contain the health crisis, maintain the stability of financial systems, help businesses survive, and support households’ economic welfare.
So decision makers should intended with data and tools to inform and strengthen their response in order to make the most of the limited time and resources available.
According to the Africa development bank outlook before the outbreak and spread of the pandemic the real GDP growth, estimates at 3.4 percent for 2019, is projected to accelerate to 3.9 percent in 2020 and to 4.1 percent in 2021.
However, to make Africa’s growth more inclusive, countries need to deepen structural reforms to diversify their productive base, build resilience to extreme weather events by adopting climate-smart agricultural techniques and providing risk-sharing platforms for households, create more fiscal space to expand social safety nets and increase the efficiency of existing programs, and remove obstacles to the movement of workers to more productive opportunities within and across countries.
In a related development, the economic impacts of the COVID-19 pandemic in Ethiopia – in regards to the airline industry and allied businesses – could cost the country some USD 1.2 billion in GDP and affect more than 323,000 jobs, a global airline body disclosed.
In a statement issued on Thursday, the International Air Transport Association (IATA) highlighted the impacts of the COVID-19 pandemic on Africa and Middle East. IATA strengthened its call for urgent action from governments in Africa and the Middle East to provide financial relief to airlines as the association’s latest scenario for potential revenue loss by carriers in Africa and the Middle East reached USD 23 billion (19 billion in the Middle East and four billion in Africa). This translates into a drop of industry revenues of 32 percent for Africa and 39 percent for the Middle East for 2020 as compared to 2019.
IATA revealed that Ethiopia will have 1.6 million fewer passengers resulting in a USD 0.3 billion revenue loss, risking 327,062 jobs and USD 1.2 billion in contribution to Ethiopia’s economy. In 2017 the country’s passenger journey was 7.3 million.