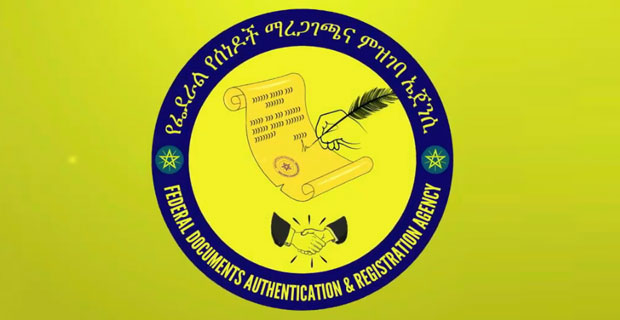 The Document Registration and Authentication Agency (DARA) introduced a strong document verification system that is used in its daily operation.
The agency that introduced technology based schemes in its operation about nine years ago by using online registration process, now applied a Quick Response code (QR code) in its document authentication and registration operation.
Muluken Amare, Director General of DARA, said that the new scheme is the beginning of the ongoing new technologically advanced operation that the agency will apply in the near future.
He said that the new system will play a big role to tackle forgery and safeguard citizens from illegal actors.
The new QR code that is printed at the original authenticated document will be readable by QR code reader.
Muluken, who was the first IT director that led the technological automation at DARA and develop the online infrastructure, told Capital that the new scheme will cut back forgery allegation.
“In the past anyone who have a fake ID will try to get for instance power of attorney and may use forged document and abuse and right and property of others without their knowledge, but the current QR code for instance will help organizations like banks to re-verify the document by their own,” he added, “in the past banks assigned their staff and send them at DARA to authenticate the documents, which takes time and money, but the new system will cut this.”
The agency has also started capturing a photo of those who give power of attorney that will also make the authentication process more strong.
“Meanwhile if a photo is not available or not printed with the documents the QR code will show the picture of the individual that give the power of attorney,” he said.
The new security features are additional proof of the way to maximize the recording of documents besides the traditional authentication scheme that is mainly based on stamps.
Digitizing all documents at DARA was launched since the beginning of this budget year and almost all of the documents of the year are recorded on soft copy, according to the head the public institution.
The Director General further said that additional security features that are based on technology are under development.
“In the past we have developed several software to improve our operations that might be for in-house purpose and also for others,” Muluken said.
One of the upcoming applications that DARA will introduce is its own QR code reader. “Currently we are using an application that is available at open sources but in the near future we will introduce our own application,” the Director General said.
He said that his agency is focusing on the advancement of technology than expanding branches aggressively which they used to do in the past. “We focus for technology that might significantly improve our operation, while expanding branches have its own costs than using technologies,” he added.
“We are under a routine change regarding technology use,” he said.
With the way the country is expanding the electronic transaction, Muluken said that his agency is ready to go with it, while reminding that some of legal frameworks of the agency need to be improved to go with the new government scheme.
For instance customers should visit a branch of DARA to sign on the documents for final authentication process but if the law changed and allowed us to approve electronic signature the scheme will be very easy, according to the Director General.
“Despite to move on this step the country should have a clear ID system. National ID will make clear the issue and alleviate the forgery on the ID system,” he added.
Currently the federal government is working to introduce National ID.
Currently the agency has 14 branches and manages 6,100 customers a day, which is tripled compared with five years ago. “The awareness of the public is expanding, the society is coming at DARA to seal business deals legally than the traditional scheme,” he explained why the number of users at the agency increased.