The giant vessel, Alkimos Heracles, has arrived at Doraleh Multipurpose Port (DMP), the biggest and most modern port in the region carrying Ethiopian cargo. Using these types of vessels creates economic scale for clients.
Wahib Daher Aden, CEO of DMP, who met Ethiopian journalists last month, said that the biggest ever commercial vessel loaded with Ethiopian cargo is coming to DMP.
According to the information Capital obtained from DMP, the vessel which is called Alkimos Heracles docked at DMP on Tuesday January 8.
“In this port we have a capacity of accommodating a big vessel with dry bulk, for instance a vessel with 80,000 metric tons of dry cargo is arriving at the port for the first time and this reduces costs,” the CEO explained.

“The arrival of these huge vessels with a big carrying capacity means from five to USD 7 less per ton for the clients. The port with its naturally high depth is considered to be one of the best in the port industry,” he added.
Big vessels are the game changers in terms of significant reduction of costs and will accelerate the land fleet with the line that will be connected in the coming months, according to the DMP top official.
In its statement that the port sent to Capital, DMP’s port said they have welcomed the first 229-meter long-rigged bulk carrier with 100,000 in deadweight, commonly stated as DWT, capacity and 80,000 MT of grain for the Ethiopian Ministry of Agriculture.
After docking on Tuesday DMP Wahib Daher and the Commercial Director Habon Abdourahman Aden warmly welcomed the crew of the Alkimos Heracles and offered a commemorative plaque to the Captain of the ship.
“This flagship of our port infrastructure has confirmed its capacity for reception and performance compared to the ports of the region and is positioned as a multimodal platform at the regional and international level,” the CEO said at the welcoming ceremony.
Wahib Daher emphasized the importance of large carriers to importers, because they significantly reduce the cost of shipping.
Also according to the DMP director of operations Bahar Mahamoud Hassan, this ship will be unloaded after 12 to 13 days, at a speed of 1,200 tons per hour.
Sources in Addis Ababa told Capital that the cargo is wheat purchased by the Ministry of Agriculture for the food security program.
Despite the vessel’s capacity to handle 80,000 metric tons, the exact volume that Alkimos Heracles loaded for the client is 77,004.567 metric tons.
The cargo is supplied by the well know Hakan Agro DMCC, a Dubai based company, which is new to such kind of supply for the Ethiopian market.
Sources said that 20,000 tons were dispersed at Dire Dawa and Kombolcha, while the balance 37,004.567 tones will be transported to Adama.
Experts added that it is the first time that Ethiopia has used this type of large vessel, which has a better economic of scale for the logistics sector.

Water, sanitation and hygiene for all schools in Addis

Can’t be out of it 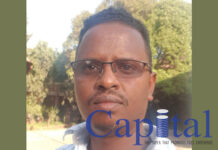