After discussions between the Amhara Cultural Tourism Bureau and the Commercial Bank of Ethiopia the seventeen members of the Bahir Dar Hotel Owners Association are being allowed to extend their bank loan payments for a year after they were hit by a decreasing number of visitors.The hotels had borrowed the funds for construction and expansion projects.
When hotel owners complained to the Tourism Bureau about the low hotel occupancy rates, the Commercial Bank of Ethiopia and other private banks only required the hotels to pay off interest on their loans. They will have to restart paying off the principal at the start of next Ethiopian year.
On October 9th, 2016, following the unrest in Amhara Region, the ruling Ethiopian People’s Revolutionary Democratic Front declared a six-month state of emergency, which was extended by four months at the end of March last year. Since that time there have been violent incidents in the area.
The unrest and the state of emergency are the primary reason fewer tourists and other visitors have traveled to Bahir Dar. This has affected occupancy rates of hotels. Last fiscal year 880,000 tourists visited Ethiopia. That is a decrease by 50,000 compared to the previous year.
Mulugeta Bazen, President of the Bahir Dar Hotel Association told Capital that over the last 18 months, hotel occupancy rates have been below 15 percent.
“My hotel has 70 rooms and before the unrest most of them were occupied. Now between one and 5 people come and reserve the rooms. There are not as many tourists as before and more than ten new hotel projects in the pipeline have stopped construction due to poor market conditions.”
He added that the hotel room occupancy was returning to normal last September but the recent university protests caused many local and international tourists not to visit the city.
“As we all know hotels employ many people, but if we don’t have long lasting peace in our area, it is hard for the hotels to earn money’’ he said.
Bahir Dar is a major conference site in Ethiopia, it ranks fourth next to Addis Ababa, Adama and Hawassa. Tourists who come to see Lake Tana, Lalibella, Tis Abay and other monasteries and churches in Gojam, often book hotels in the city.
Last year the Addis Ababa Hotel Owners Association wrote a letter to the Prime Minister’s office and the Ministry of Culture and Tourism asking that all hotels in Addis be exempt from profit tax and loan interest this fiscal year. They argued that protests caused low occupancy rates and reduced income. 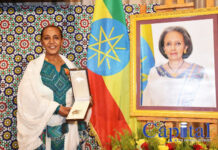