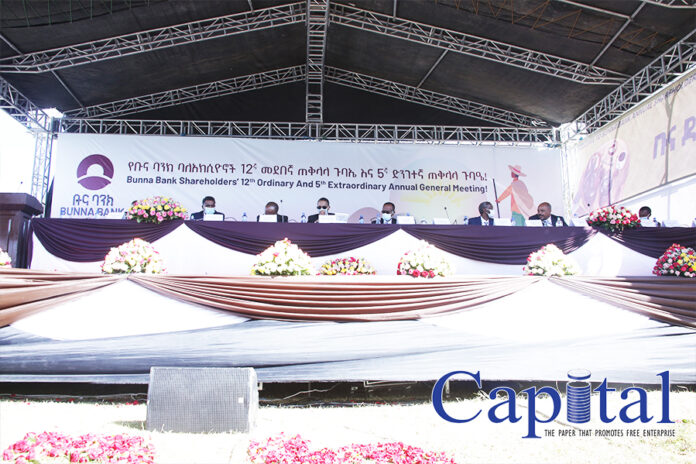 Bunna Bank attracts over half a million new customers as its net profits rocket past the half a billion mark registering dominance in the financial space.
In the 2020/21 financial year that ended on June 30, 2021, the banks that is considered as a late comer compared with the financial firms that were formed about a quarter a century ago was able to attain massive success in terms of different banking activities and measurements.
For instance in the recently concluded financial year, its customers’ base has tremendously been boosted with new depositors being drawn to the company in multitudes of hundreds of thousands.
The annual report stated that during the financial year efforts were made to scale up the number of customers through various means.
The report indicated that the total number of customers who opened a new deposit account during the year in review stood at almost 580 thousand.
“The total outstanding deposit account for holders of the bank as a result has reached over 1.38 million as of June 30, showing a 71.5 percent increase in comparison to the previous year,” the annual report of Bunna disclosed.
The success registered on customers base has also reflected on the deposit mobilization that the bank attained from the financial year.
According to the annual report, as of June 30, 2021 the total deposit mobilization has reached a high of 20.46 billion birr resulting into an increase of 47.5 percent compared with the performance recorded on June 30, 2020.
“The net deposit increment performance was also higher than the new increment performance registered in the previous year by 3.3 billion birr or by more than 100 percent,” the bank board of directors’ report elaborated.
For the year, the performance of saving deposit was higher by 112 percent as compared with the performance registered a year before.
Most importantly the saving deposit has continued to lead the deposit portfolio and took almost 79 percent or 16.1 billion birr of the total deposit mobilization.
In its 12 years of operation, Bunna bank has been able to provide 18.3 billion birr in outstanding loans and advances for its customers up to its recent financial reporting period.
For the reporting year, an additional 6.7 billion birr loan and advances have been disbursed for partners working with the bank, while the outstanding amount was 11.6 billion birr a year ago.
In the year, the bank has generated 3.3 billion birr showing an increment of 51.5 percent compared with the preceding year.
The boost on deposit mobilization and customers’ base has also contributed to the hike of interest expense by over 356 million to reach 898 million birr from 542 million birr a year back.
One of the massive achievements registered for the year was the profit that the bank amassed.
According to the annual report, 937.4 million birr in profit before tax has been secured which is up by 355 million birr or 61 percent compared with the 2019/20 achievement.
For the year, Bunna’s profit after tax has extensively surpassed half a billion birr for the first time to stand at 671 million birr. A year ago the profit after tax was 440 million birr.
Similarly, the earnings per share have peaked to 29.3 percent from 22.5 percent from a year ago.
In his annual report address Mulugeta Alemayehu, President of Bunna Bank, said that the bank’s dividend to be paid has improved to 22.31 percent from last year’s 13.78 percent.
As of June 30, the bank’s total asset has increased by 37.6 percent to reach almost 26 billion birr from 19 billion birr a year ago.
As per the report, the bank’s total capital has reached 3.8 billion birr with the increment of 24 percent, while the paid up capital has increased by 16 percent to accomplish 2.51 billion birr.
On his annual report message, Sewale Abate, Board of Directors Chairperson said that the bank has been tirelessly working to access additional plot from the Addis Ababa City Administration which received a positive response.
“In addition to the 1043 square meters of land around Mexico Square it secured previously, the City Administration has given a green light to the bank for provision of another piece of land,” the Chairperson added.