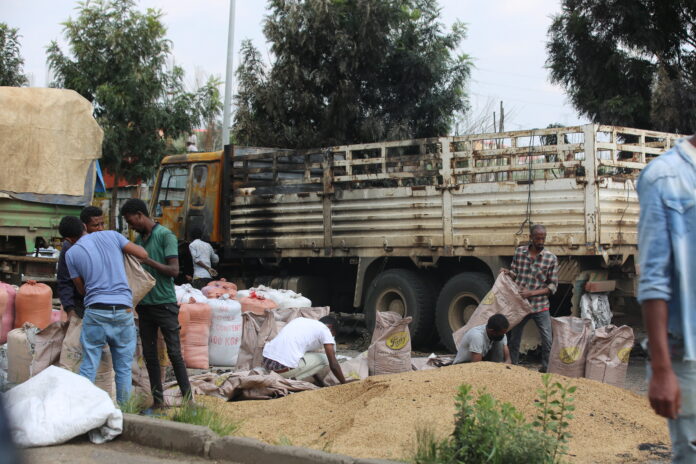 The Ethiopian Human Rights Commission (EHRC) announced it has found that crimes against humanity was committed by individuals and groups who directly participated in the violence and security crisis that swept through Oromia Region following the death of musician Hachalu Hundessa on June 29th, 2020.
EHRC visited over 40 different localities in Oromia Region over the course of several days as part of its investigation into human rights abuses committed there between June 29 – July 2, 2020, findings of which were released on Friday January 1, 2021.
In the 59 pages report, the findings state that attackers moving in groups used axes, knives, machetes, sticks and other weapons to kill and injure civilians in gruesome ways that involved beheadings and torture. Altogether, 123 people died and more than 500 were injured in the carnage that also displaced thousands from their homes.
The findings show that the attacks meet the elements of a crime against humanity with large numbers of people, organized in groups, having selected their victims on the basis of their ethnicity or religion when conducting a widespread and systematic attack in several different areas over the three days. The report also states, while it is understandable that security forces had the challenging task of restoring order in the face of such widespread violence, the proportionality of the force employed in some contexts is highly questionable. In some instances, security forces employed disproportionate force in their attempt to restore order amidst widespread violence and as a result, passersby, bystanders, young people, elderly people stepping in to mediate, and even police officers lost their lives from gunshot wounds despite having no participation in the unrest.
The Commission in its report stated that finds that the attacks during the unrest and overall commission of the crime by individuals and groups who directly took part in it, constitutes the elements of a crime against humanity. “More specifically, a large number of people, organized in groups for the most part, moved from place to place to kill, bodily and mentally injure and displace people; destroy property; the conduct was committed as part of a widespread and systematic attack against civilian population that extended to at least 40 different localities and over three days from the early hours of June 30th to July 2nd , 2020; Some targets in the attacks were selected on the basis of ethnic and religious identity. Other civilians were attacked with intent regardless of their religious or ethnic affiliation; and the perpetrators knew that the conduct was part of or intended the conduct to be part of a widespread or systematic attack directed against a civilian population,” reads the report.
“On the basis of the above findings, the overall conduct carried out by the attackers who were organized in groups, and the result thereof, is not a simple criminal act but a crime against humanity which is an atrocity crime and a grave violation of human rights,” reads the finding.
The report further states that in the 40 localities where the Commission’s investigation took place, following news of musician Hachalu Hundessa’s death, a large number of people went out into the streets, initially in the form of protest. After an act of burning tires, throwing stones and closing off streets, groups went on to attack people and destroy property in a conduct that took up pace beginning June 30th. “In localities where protesters who went out into streets caused unrest and attacks, civilians were attacked inside their homes by individual and grouped perpetrators and were beaten and killed in streets in a gruesome and cruel manner with sticks, knives, axes, sharp iron bars, stones and electric cables. People have also suffered mental and bodily harm; their houses and property were either looted or intentionally burned. People were displaced as a result and both private and public property was destroyed,” the report states.
“While the conduct varied from place to place in scale a   nd nature, the attack targeted people of Amhara ethnic origin in localities where Christians constitute the majority of the local population and, inversely, Orthodox Christians where Muslims are a majority,” further reads the report.
The report also blamed security forces saying that the role of the security forces in preventing and stopping the attack on people and property also varied from place to place. “In some of the localities, security forces had appropriate preparedness and successfully managed to prevent, stop or minimize damage. On the contrary, where the security forces had minimal preparedness, such as in Batu, Shashemene, Chiro, Haromaya, Woliso, Adama, Goba, Arsi Negele and Arsi Robe in particular, as well as Dera, Adaba, Agarfa, Kofele, Djadju and Iteya, the damage was extensive,” states the report.
“EHRC found that the localities where the devastation was massive, local authorities and security did not respond to victims’ repeated calls for help, being told instead “that higher ups gave no order to intervene, we are not here to protect private property, we are here to provide security to government development institutions, banks and religious institutions”. Survivors and witnesses also recount how sometimes police stood watching as the attacks took place. “It did not feel like we had a government!” decried one victim the Commission spoke to. Local authorities, security forces and government officials on their part say that the widespread nature of the attacks and the large group of people taking part in them, made it difficult to stop the attacks with sufficient speed and scale. However, the lack of preparedness on the part of the Regional government to prevent such attacks, including in those localities where similar attacks have taken place before, has exposed people to a repetitive cycle of abuses and violations,” reads the finding.
The report also states that there was disruption of medical services. “In some of the localities where EHRC’s investigation was carried out, witnesses describe being barred and prevented from accessing medical services. In Guna Woreda, Negele City, Arsi Negele and Dodola, in total violation of human rights obligations, security forces even went inside medical institutions and harassed, including by threatening medical professionals, and barred victims from getting medical help. Flouting their humanitarian and professional obligations, some medical professionals themselves, in Wolisso in particular, refused to treat victims of the attacks,” the report states. The report recommended to start the process of investigating and bringing to justice and hold perpetrators accountable based on the Commission’s findings of crimes against humanity.
EHRC’s Chief Commissioner Daniel Bekele said, “Given the repeated pattern of atrocity crimes in the country, Ethiopia needs to design and implement a comprehensive national strategy for the prevention of atrocity crimes which aims to address the root causes of the problem”.