Dashen Bank known for its pioneering stance of introduction of ATMs and Card banking system has now introduced a new digital platform that will link Queens Supermarket and Addis Home Depot.
The digital platform will enable smooth trading by settling any sales services done through the bank by the stated two retail companies that are under the Midroc Investment Group.
At the ceremony held at Amudi Plaza, around Tor Hayloch, Adbulfetah Yusuf, head of Addis Ababa Trade Bureau, said that digital payment systems are crucial in making trade a major player in the country’s economy. “The city administration is supportive in the encouragement of cashless payment systems and is constantly seeking to expand technology-based digital operation,” he added. 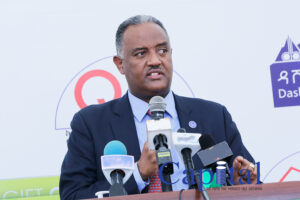 Assfaw Alemu, President of Dashen Bank, said that digital banking has consistently become the best option for the finance industry and that the future will be directly correlated with this technology. Similarly, the government has already introduced a strategy to boost the sector development through the same.
“The future of the banking industry and its pillars stand firmly on technology. The National Bank Strategy highlights that as the sector leader it wants to use technology as a pioneering step to financial inclusion,” the president explained.
Assfaw Alemu, expressed that currently customers that visit Queens’s outlets are paying in cash. “For instance when purchasing items with price tags of 20,000 birr and over from Home Depot, one has to have chunks of cash in their pockets. This new payment plan gets rid of this step and makes the payment process cashless and easy.”
He recalled that the bank also introduced the use of the debit cards way before the country had such laws. He also emphasized that the bank has continuously anchored its operations towards technological advancements.
The new initiative is a money powered card that will allow financial transactions at the stated facilities of the two outlets. The sector experts also pointed out that there will be provision for gift cards which will make the new initiative unique.
Assfaw explained that though it is preferable to be a Dashen account holder, it is not necessary when using this scheme. 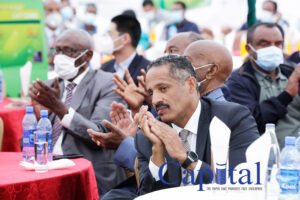 “The card is equipped with contact less features that also works on the internet and other formats. It is also reloadable,” he explained.
He expressed his appreciation for Midric Investment Group which accepted to work with the bank under their facilities.
Jemal Ahmed, CEO of Midroc Investment Group, said that the retail outlets are expanding their businesses with international standards. “Since Midroc Investment Group restructured its operation, Queens Supermarket has been beneficial to its operations. We are working to add five more shops including expansion on two existing centers in the coming three months at different locations in Addis Ababa,” he added.
Currently Queens is operating five outlets and before the end of this year more centers are expected to be opened in Addis Ababa and more in major cities in the coming budget year.
Jemal said that the group has targeted to make the retail market competitive in every corner of the country, with international and modern standards like others global retailers. “The digital payment system is one of the modernization processes that the retail company aims to achieve in the near future,” he explained.
Bekele Bulado, Deputy CEO of Midroc Investment Group, who leads the trade and service sector at the group, said that the number of outlets including Home Depot is currently 11. “We are improving the capacity and service of seven outlets and additional four new centers will be opened in the budget year,” Bekele said. He also expressed that in the coming two years modern facilities will be opened.
Jemal said that in the future the group in collaboration with Dashen Bank will introduce credit card services without interest for the transaction at the given outlets. This credit card collaboration is yet to be given a green light by the regulatory body.
Bekele said that the group has reorganized its leadership to supply agricultural and industrial products with shorter supply chains directly from its partners to production centers for the general public. This has resulted in cheaper rates thus stabilizing the market. 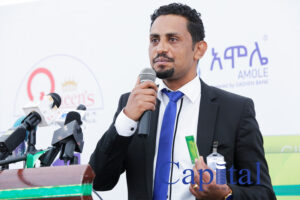 Bekele, former Minister of Trade followed up the new payment scheme remarks from the Dashen’s Bank President, by stating that said that the number of customers visiting the supermarket outlets have significantly increased following the new restructure.
“For instance the number of clients that had visited the outlets in September were 270,000 up from 53, 000 in June,” he explained.
He said the gift card payment system that was officially introduced a week ago is part of the strategy that the group targets to achieve to satisfy its customers.
Those who will use the card, they will receive three percent discounts at the retail outlets for the coming three months.