Djibouti, which is undertaking massive mega projects related to port and logistics services, announced that it will continue similar projects with the Public Private Partnership (PPP) to avoid a lot of external debt.
Ilyas Moussa Dawaleh, Minister of Economy and Finance of Djibouti, said that his country will continue its massive economic developments.
Ilyas said his country has numbers of investments in the pipeline. “To be honest we are coming to the limit of our public financing capacity and we should not look exclusively to public investment for regional infrastructure as well as national infrastructure for diversifications,” he explained.
In the past few years the government of Djibouti has carried out massive mega projects in infrastructure, port service and other major economic pillars.
Some of the major mega projects are the expansion and new ports of the country that are targeted to accommodate the growing import/ export demand of landlocked Ethiopia.
Within a single year in 2017 Djibouti has inaugurated three new ports including Doraleh Multipurpose Port (DMP), the biggest port facility for the country and in the region.
Other new companies; Djibouti National Shipping Company, Red Sea Bunkering, Air Djibouti , and railway also enjoy the logistics and infrastructure business through government ownership or on a JV basis.
Different reports have also stated that the country that has close to USD 2 billion GDP has an investment of six times more of its GDP or about USD 12 billion by the government and the private sector.
However the country registered massive growth in the past few years as recognized by international institutions and international partners like the International Monetary Fund who expressed their concern that the country’s external debt has been growing significantly.
They advised the government to slowdown some of the projects.
However the government of Djibouti stated that it will continue with in projects using different methods than it had previously used.
“Opportunities are there. Finance is not an issue as capital resource is available around the world. Capital availability in the world is highly in abundance,” Ilyas said.
“Now it is all about who will implement the sound policy, the regulatory framework, and who will be dependable for direct investment. So we frame it and under implementation of PPP so the investment will be increased once the business environment is made and fixed properly. But the priority is stability and peace of the country,” the finance minister explained.
He said the private sector’s role is key to transformation.
Other projects are also expected to enhance the country’s development.
“The capacity of our ports is now 20 million tons in a year and in the coming four years it will be 50 million tones,” Ilyas said. “Even if that’s the case, we can’t afford to handle 100 percent of Ethiopia’s shipments alone,” he added.
He said that Ethiopia is right to see alternative ports in the region adding that he would do the same if he was leader of Ethiopia. “We still will be the major logistics provider for Ethiopia,” he added.
“We also need to diversify our market for other partners like China or countries in the Middle East and Europe. If we can manage up to 70 percent of Ethiopia’s international trade traffic volume, then my ports will be working to their capacity. The remaining must be distributed to the rest of the ports in the region,” he added.

Muscles are the main actors of movement 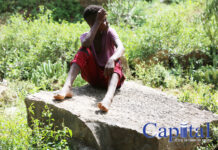