A man who was caught carrying a significant amount of foreign currency out of the country was granted bail.
Mekonen Abreham, who allegedly attempted to carry 36,000 USD; 14,000 ETB and 4,500 Euro to Djibouti without a permit when he was stopped during a routine check via the x-ray at the Bole International Airport. The police report stated Mekonen had the cash, which amounts to approximately 1.14 million birr, in his bag.
Mekonen claimed he was taking the money to pay his drivers in Djibouti.
Prosecutors argued Mekonen could be a flight risk especially since he has permanent residence in Djibouti. They wanted him to be prevented from leaving the country. However the court disagreed and allowed him to be released on two million birr bail.
Prosecutors of the office sighted the National Bank of Ethiopia’s establishment proclamation as violated. The proclamation made forbids any foreign currency to be carried without a permit and also Ethiopian Birr exceeding the minimum limit set by the Bank.
The suspect was released and ordered to appear on July 12, 2018. At that hearing he will enter a plea.
The money was confiscated and receipts are being used as evidence.
Foreign currency and Khat are frequently confiscated by customs officials at Bole International Airport. 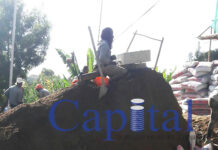