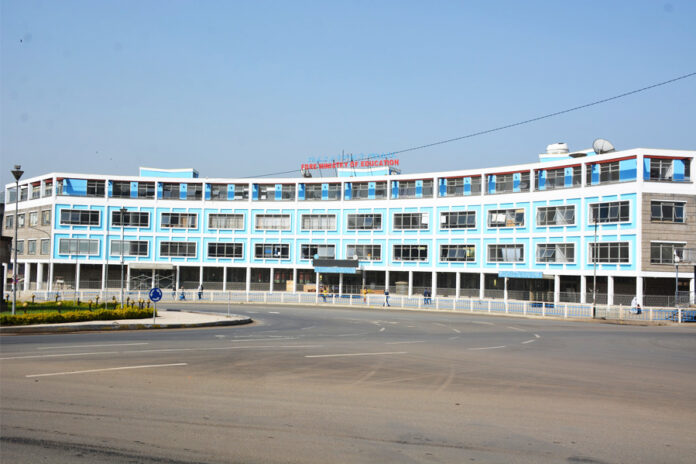 Ministry of Education tables a draft for education proclamation to the Council of Ministers, which is a first of its kind.
Despite public institutions financed by the federal government being established by the regulation of the Council of Ministers, the education ministry had no regulation or law enacted by the state which meant Ethiopia did not have an education proclamation.
“The absence of the proclamation has been blockading the ministry to expand its way and enhance quality of education, as well as issue directives,” Muluken Nigatu /PHD/ Director general of education quality assurance at the ministry stated.
Muluken further explained that the proclamation will help to guide the ministry to create an appropriate legal framework and autonomy that complies with the requirements of the state law and other federal minimum quality standards, which sets specific rights and duties of the Ministry of Education.
Passing due processes, the draft has been tabled to the Council of Ministers, and as he disclosed the proclamation is expected to be ratified within two months.
In related news, on Monday January 3, 2022, the House of Peoples Representatives’ Standing Committee on Public Expenditure, Administration and Regulatory Affairs discussed with the Ministry of Education on the licensing and supervision and qualification of private primary and secondary schools and performance report of private schools in Addis Ababa for the fiscal year 2020/21.
As the report shows, the sample take from both private and international schools shows that there is no teacher who takes professional qualification assessments. Moreover, there is no guideline for enrolment and licensing requirements for international and community schools, as well as directive to establish an educational institution and licensing in addition to renewal of private primary and secondary schools.
During the discussion, the Standing Committee advised the ministry to change ‘Licensing and Supervision of Private Educational Institutions No. 206’, which was approved by the Council of Ministers starting from1994/95, which has not been amended and made up-to-date.
Commenting on the issues, Muluken said the ministry is preparing a qualification frame work.
Also regarding on the quality of general education, Education Minister Berhanu Nega (Professor) said there are more than 47,000 schools in Ethiopia, adding that 90 percent of the schools in the country are underdeveloped.
According to Berhanu, there is a basic education problem in Ethiopia and as the Ministry of Education highlights, less than 20 percent of teachers in the country have passed the qualification assessment, while less than 90 percent of schools over the nation do not meet standards which is set by the ministry.