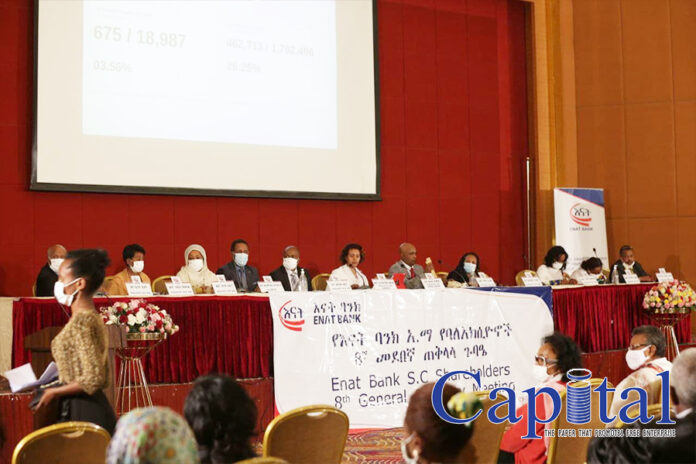 Enat Bank’s deposit mobilization and disbursed loan surges in the past financial year. For the first time the bank’s profit has surpassed the quarter billion birr mark.
The annual report of Enat, which is considered as one of the late entrants to the financial industry, indicated that in the 2020/21 financial year the bank’s outstanding deposit has increased by 35 percent.
It indicated that the deposit mobilization by June 30, 2021 has reached 11.2 billion birr. It has also achieved additional 2.9 billion birr more in deposit amount in a single year.
Similarly, the outstanding advance and loan amounted to 8.97 billion birr registering growth of 40 percent compared with the preceding year. 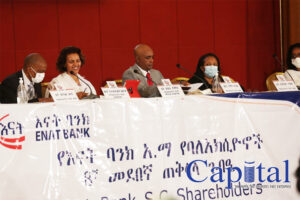 According to the annual report presented at the 8th general assembly in the 2020/21 financial year alone, the bank has disbursed additional 2.5 billion birr in loan and advances to expand the outstanding amount to almost nine billion birr.
The total asset of the bank has almost increased by one third compared with the performance attained a year ago.
The annual report of Enat indicated that in the closed financial year its total asset has stood at 14.6 billion birr with the increment of over 31 percent from 11 billion birr of a year earlier.
In the year, the total operating income stood at 791 million birr up from 672 million birr from the previous year.
The report indicated that the profit before tax for the year has reached 289.4 million birr, which is a first for the bank in terms of surpassing the quarter billion birr mark in profit over its operational period.
In the financial year that ended on June 30, 2020 the profit before tax was 239.3 billion birr that is lower by about 20 percent compared with the latest reported performance.
For the year, the profit after tax has also expanded by 10.2 percent and stood at 229.7 million birr from 208 million birr of the preceding year.
The paid up capital of the bank has been boosted by 12 percent to reach 1.54 billion birr.