Ethio Telecom launches Tier III Ready Modular Data Center further strengthening its 127 years of service to Ethiopia.
Dubbed as the biggest Tier III ready modular data center in Ethiopia, the center will facilitate the smooth operation of the recently launched mobile money service, telebirr.
The newly deployed data center is located around Gola Sefer, equipped with 5 POD (Points of Deployment), 16 cabinets per POD, which can support 10 servers per cabinet. The total capacity of this facility can reach 800 servers. According to Ethio Telecom’s plan, the newly built data center will firstly serve existing service provision such as mobile money and business support systems, and the extra capacity could be used for new business such as colocation and cloud service in the future. 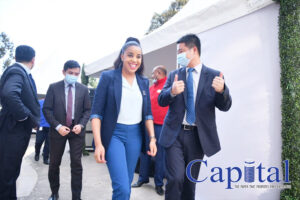 Modular data center has become a mainstream form of data center deployment around the world recently, thanks to its short delivery period and high energy saving ratio.
Huawei delivered Ethio Telecom’s data center within 2.5 months, while the traditional way of deployment would take more than 5 months. Meanwhile, modular data center has power usage effectiveness (PUE) of 1.4, 25% less than traditional data center. After installing Huawei NetEco power monitoring system, it can further reduce 35% of operation and maintenance cost. The routine patrolling and monitoring of the modular facility can be performed by robot.
Mobile financial services have become a significant part of African telecom operators’ businesses after Kenya’s Safaricom pioneered them with M-Pesa in 2007, giving people an alternative to banks.
Ethio telecom plans to recruit 21 million users for the service in the first year of operation, rising to 33 million in five years. The sole telecom provider anticipates that about 40 to 50 percent of Ethiopia’s annual economic output will be transacted on the platform by the end of the five years.
The Ethio telecom Mobile Money platform deployed currently have the capacity of processing up to 100 transactions per second (TPS) and can be easily scaled up to 1000 TPS in the future.
The service is accessible with SMS, USSD and smartphone applications and it can also scale up to more functions in the future.
Ethio Telecom, which had revenue of 25.57 billion birr in the first six months of the current fiscal year, has 52.7 million total subscribers.