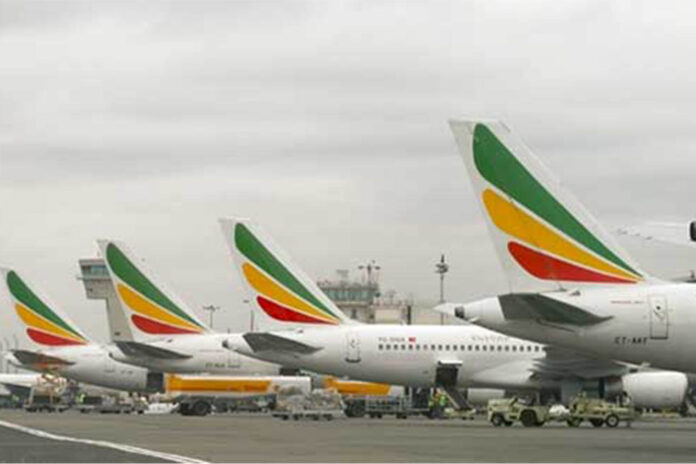 The flagship airline Ethiopian Airlines has asked staff to take their annual leave in the coming weeks to help it cope with the impact of the coronavirus from low percentage of passengers.
The airline has offered a special leave scheme to most of the employees in a specific set of time starting from this week on.
Even if as international airlines have canceled their flights to China amid fear over the corona virus, Africa’s largest air carrier, Ethiopian Airlines, has refused to do so. “The airline is seeing a 20% decline in demand, the corona virus is a huge challenge” said Tewolde GebreMariam, CEO of Ethiopian Airlines Group on African Aviation week that was held last week in Addis Ababa. The outbreak of the virus demonstrates the resilience of the industry, not just passengers also cargo flights especially to China have been declining.
Due to the high spread of the virus there is a worldwide fear of travel and governments are banning their citizens to move from one parts of the world to the other.
“At such times the air line take this kind of options and helps to minimize the effects, as the situation remains dynamic, our flight schedules may change at short notice to comply with regulatory directives or operational requirements. At all times, we aim to provide the updated information to our esteemed customers as early as possible,” the airlines stated.
Change fees are not applicable to tickets issued anytime for travel from March 1onwards until June 30. If there is a difference in the airfare or applicable taxes, due to the reissue/rerouting of the ticket, the additional amount will need to be collected. Customers can change their booking to travel on/or before December 31, 2020, the airline said in a statement.
Air traffic routes between Africa and Asia grew by five per cent in 2019 – more than the global average. Now, African carriers fear a shortfall of more than $400m (352,3m euro) due to the disruption of services to China alone, a direct result of the Coronavirus outbreak.
Raphaël Kuuchi, vice-president for Africa of the International Air Transport Association (IATA), said that “initial estimates indicate that $400m could be lost” by the continent’s airlines, based on data gathered “in the second week of February” and due solely to the cancellation of services to China.
The data were made public during the Aviation Africa Summit, held 4–5 March in Addis Ababa.
The Coronavirus epidemic has forced almost all African airlines – with the exception of Ethiopian Airlines – to stop flying to China.
Airlines all over the world are hit hard by coronavirus in the past few weeks. The effects are also estimated to wipe out up to USD 113 billion in worldwide revenues this year, a trade group said, a new blow to the industry.
It has been almost 20 years since the aviation industry faced such an existential threat. After the terrorist attacks of Sept. 11, 2001, global air travel plummeted, and it took years for airlines to fully recover. Today there are worries that the coronavirus could have a similarly disastrous impact.
“At the end of last week, we started seeing very sharp declines,” Gary Kelly, chief executive of Southwest Airlines, said on CNBC. “It has a 9/11-like feel.”
The aviation industry was already grappling with the worldwide grounding of Boeing’s 737 Max, which has been out of service for a year after two deadly crashes. Losing that one plane sapped some airlines of expected growth, forced them to cancel thousands of flights and resulted in billions of dollars in losses.
The more fundamental issue posed by the coronavirus – that large swaths of the traveling public may simply stay off planes for the foreseeable future – is a far greater threat. Though still in its early stages, there are concerns that a prolonged disruption could do lasting economic damage. Commercial aviation, like the internet, is part of the connective tissue of the global economy.