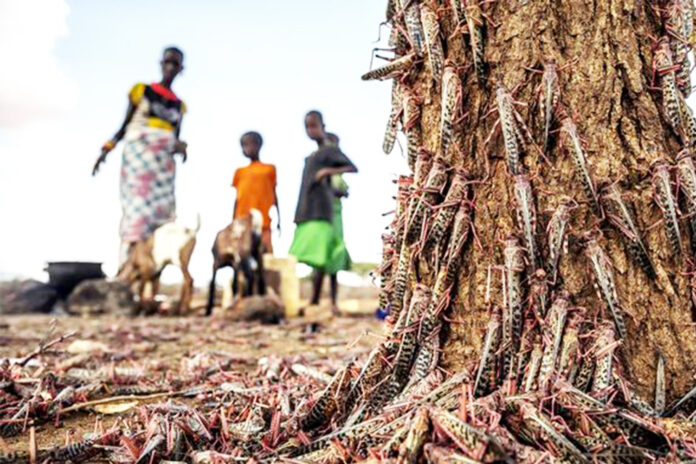 Immature locust swarms continue to migrate southwards from different breeding areas in eastern Africa, the Food and Agriculture Organization (FAO) said Monday.
In its desert locust situation update, the FAO cited the migration of immature swarms from eastern Ethiopia and central Somalia to southern Ethiopia and northern Kenya.
It also showed that a few immature swarms recently reached Mwanga district in northeast Tanzania.
“In Kenya, immature swarms continue to arrive and spread throughout the north. So far, swarms are present in the four counties of Wajir, Garissa, Marsabit and, most recently, Isiolo,” said the FAO.
“Breeding continues, and hopper bands are present in the southeast [Kenya] near Taita Taveta and along the coast.”
In Ethiopia, according to the FAO, immature swarms have concentrated along the eastern side of the Harar Highlands in the Oromia region on their way to southern areas of the country, including southern parts of the Rift Valley region. The situation update also indicated that there are cross-border movements of locusts in areas around the northwest of Somalia and along the southern border with Kenya.
The UN agency called on all countries to maintain the necessary survey and control operations to reduce migration and breeding.
It also warned that dry conditions in some areas where the swarms are arriving could facilitate their spread throughout southern Ethiopia and northern Kenya.
There is a moderate risk that a few swarms could reach central Kenya and perhaps the southwest as well as northeast Tanzania, eastern Uganda and southeast South Sudan in January, according to the FAO.
“Once swarms arrive in favorable areas, they will mature and lay eggs that will hatch and cause hopper bands to form during February and March,” said the FAO, reaffirming its commitment to control measures, which it said would continue in all affected countries in East Africa.
Last year witnessed the most serious outbreak of desert locusts in recent years which spread across East Africa, posing an unprecedented threat to food security.
Five countries have been especially hard hit by the African migratory locusts: Ethiopia, Kenya, Somalia, Sudan, and Yemen. As a result, more than 35 million people suffer from food insecurity. FAO estimates this number could increase to 38.5 million if nothing is done to control the new infestation.