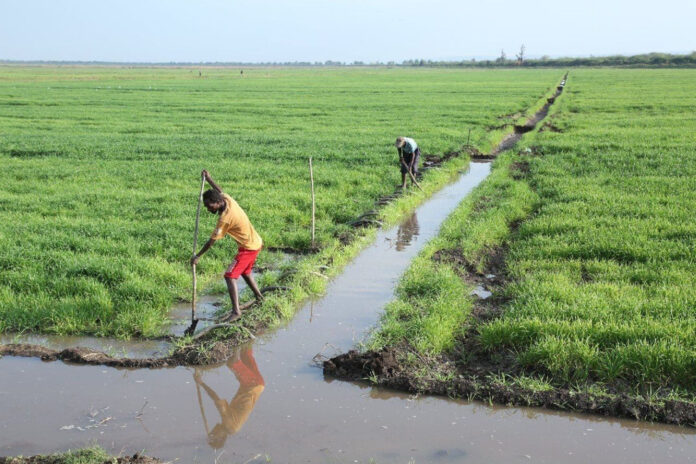 Ministry of Agriculture (MoA) is set to facilitate a market linkage meeting with farmers via cooperatives to wheat millers. Similarly, lowland wheat harvest have achieved on average 40 quintal per hectare, which is a record for the sector.
Omar Hussien, Minister of MoA, said that as per the request of millers in the country the ministry has arranged a discussion with farmers to create market linkage for industries.
He said that on the initiative that the government halts importing wheat from abroad millers, which receive the grain from the government as per their quota, sparks of interests have been shown thus need to contact farmers to access the input for their production if the government stop importing the wheat has become integral.
The country is allocating at least a billion birr to import wheat since the local production is not ample to fill the demand.
Last year the government had introduced an initiative to produce lowland wheat on the irrigation scheme to easy the import that consumed the scarce hard currency. As a result, Lowland wheat harvest achieved on average 40 quintal per hectare, which is a record for the sector.
The ministry has disclosed that in the second year of the initiative, the government targets to cut wheat imports within the maximum five years as they predict that half of the deficit will be filled.
This being the second year of the planned year, the government has targeted to harvest up to ten million tons of wheat, which is more than half of the 17 million ton deficit.
If we continue as per the current path the target will be achieved by next year.
In the current season 250,000 hectare of land is expected to be covered by wheat, while the initial projection was to cover 300,000 which has gone on to change due to the effects of flood in the past rainy season in Afar region.
According to the Minister, for the year wheat production in Amhara and Oromia got a priority, while Afar and Somali lowlands have been included.
Omar said that on the new wheat production scheme over 12,000 farmers will be encompassed.
“On this scheme we have also changed the productivity and research. In the past productivity and research have been undertaken separately but since we started the new scheme researchers and agricultural experts are working together to improve the harvest,” he said.
“Some may think the lowland wheat production is the result of researchers but we are working jointly that is why we registered promising results,” he explained. According to the Minister, this practice will continue on other sectors.
Flour factories also raised their concern when they heard about it.
The lowland wheat production harvest is up to 40 quintal per hectare, while on the rainy season the average production is 29 quintal per hectare.
“For the year as a show case we are planting 500 hectare in Gode, Somali region for wheat cultivation that will expand in the coming year since the initiative mainly focused on lowland areas of the country that are massively focused on Afar and Somali regions,” he told Capital.
The government has stopped most of the duty free schemes since the reformist ruler come to power and in contrary it has opened the importation of tools and machineries on duty free scheme for agriculture to achieve production and productivity.
Omar said that 560 items have been included on the duty free scheme to improve the agriculture sector and enable the country to fully sufficient on agricultural production and expand export for further hard currency earning.