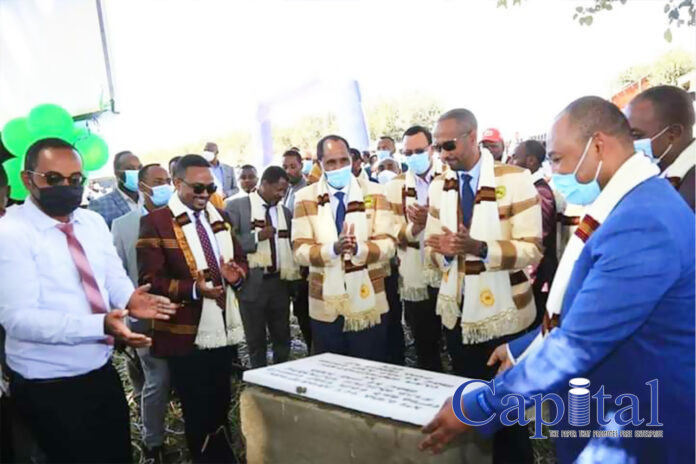 AMA business group that is engaged in production of paper and paper packaging manufacturing turns its face to construct another big oil factory in Sidama Regional State that is worth 1.7 billion birr.
According to the AMA group, after its construction the factory will have a capacity to produce 300 tons of edible oil and other related inputs per day.
On Sunday December 27, 2020, the foundation stone was laid on a 3,500 square meters of plot in Hawassa which is attended by senior federal and state officials both from the Ministry of Trade and Industry and the Sidama regional government.
The company which has been engaged in producing paper and paper packaging has been operating since 2013 in Hawassa which was the former capital of the South Nation Nationalities and Peoples Region. AMA will also build other factories on an area of 100,000 square meters and will include seven projects. These include cooking oil, plastic, cardboard, soap, sacks, tin cans, and coffee mills. The first is the oil plant, which is expected to produce 100 tons of oil a day in the first year. By the end of the second and third years, it will be able to produce up to 300 tons of oil a day.
Behailu Tefera, General Manager of AMA Trade Enterprise said that the first project is designed to meet domestic demand. He said the first phase will start with the importation of palm oil, which will be used in collaboration with the regional government to produce soybean and wool. He further explained that the products of the factories in the industrial park will be interconnected. He also said that a jerrycan factory will be set up there. According to Behailu, factory shades will be built by foreign institutions, but the installation will be carried out jointly by locals and foreigners.
As Behailu said after its completion, the factory will create job opportunities for more than 200 people. He emphasized that the factory will bridge the gap the priorities of the nation to stop imports of edible oil. The factory is set to play a great part and the government is also supporting the construction of the factory.
The government has set to suspend the import of edible oil as of the beginning of Ethiopian New Year after local pressers are at a final stage to commence massive production. Besides Shemu PLC, which is located in Dire Dawa, industries are being constructed in Bure and Debremarqos by Belayneh Kinde and Workqu Aytenew that does have a huge capacity that will use local oilseeds and import crude oil as input. East Africa Holding, Hamaressa Presser, located in Harar is also the other promising industry.