With a 375 million birr investment, legendary athlete, Haile Gebresilassie, opened his fifth chain hotel in Arba Minch 510km South of Addis. It is called Haile Hotel and Resorts and will have views of the twin lakes Abaya and Chamo.
The hotel which lies on 4.2 hectares has been under construction for one year and seven months and when it officially becomes operational it is expected to create 300 jobs.
According to Haile the hotel will have a four star rating. It will have 110 rooms, four meeting halls, a swimming pool, a football field, and parking spaces. New facilities are being built for shops and banks to give visitors better service.
Consulting work for the hotel was done by Geleta Consultancy. The athlete paid for the construction using his own money debt free.
At a press conference in Alem Cinema last Thursday, Haile said that the hotel will attract more tourists to Arba Minch.
“All of us know there are small number of hotels compared to our population, so we need to build more hotels to serve more people. As one citizen of the country I have to do more business both to benefit myself and others.”
Expansion projects are planned in the future to build more apartments and a hospitality college.
Capital asked Haile why he is more interested in hotels rather than in manufacturing, which the government is trying to promote and support.
“I am working on coffee and honey exports but it has not been that successful. I want to work in manufacturing but I don’t want to invest much in it when 50+1 percent of the raw material is imported and hotels are important because they serve international and local customers.
Currently Haile is working to open chain hotels in Debre Birhan, Konso, Karat, Jinka, and Turmi areas.
Haile Gebresilesassie is a retired Ethiopian long-distance track and road running athlete. He won two Olympic gold medals four World Championship titles in 10,000 meter events. He won the Berlin Marathon four consecutive times and also had three straight wins at the Dubai Marathon. He also won four world indoor titles and was the 2001 World Half Marathon Champion. 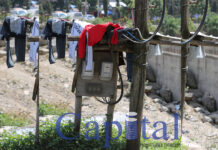