Hellotaxi handed over more than 200 locally assembled 7-seater tourist standard vehicles for drivers on June 17, 2021in the presence of senior government officials.
“Realizing that there is not enough tourist transport facility in the country to accommodate both local and international tourists, our company has launched the first large-scale tourist taxi service in collaboration with the Ministry of Culture and Tourism,” said Daniel Yohannes, owner and general manager of the company. 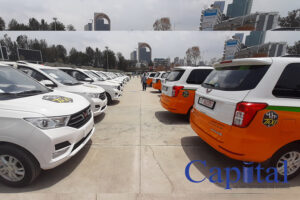 The cars, initially worth one million birr, have gone down to 690,000 birr with the tax exemption. Hello taxi also facilitated loans to its customers with an initial payment of only 25 percent of the car with the rest of the payment to be completed within 5 years,
During the handing-over event, Culture and Tourism State Minister, Buzena Alkider said that Ethiopia has a huge potential for job creation opportunity on the tourism sector.
O’Clock General Motors, which had initially started the process of recruiting different blue taxi owners in the city nearly two years ago, delivered it through Hello Taxi, which will be working with the drivers in providing the tourist service.
“We are honored to be able to create jobs for many citizens, both directly and indirectly,” said Daniel.
Previously, Hello taxi handed in the first round a year ago, Toyota Yaris Sedans with a four-cylinder 1.3 horsepower five-seater, currently used in Dubai, at the Sheraton Addis Hotel, and in the second round handed over 36 7-seater cars mostly from Turkey and Thailand.