Kegna Beverage S.C, one of the companies that followed the economic revolution in Oromia Regional State in 2017, has signed a deal with a German company for the supply and installation of brewery machineries.
On an event held on Saturday, June 19, 2021 in Ginchi Town in west Oromia region Kegna signed the deal with the German company, Krones AG. Dirk Hamleaning a representative of Krones AG and Tolosa Gadefa, chairman of the board of directors of Kegna Beverage were present in the presence of delegates of the company and board members of Kegna Brewery SC. 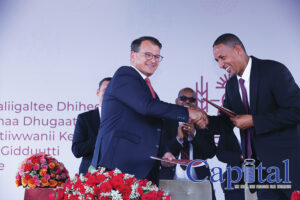 “The agreement comes to life after a long and strong negotiation with deep analysis of every single step and document,” said Tolosa.
According to the company, the process of the bid for the procurement and installation of machineries took about 10 months including the bid document preparation up to evaluation of the bid.
As stated on the signing ceremony, Krones AG is a reputed German company and leader in the sector.
Kegna beverage is building a factory in Ginchi town which is some 83km west of Addis Ababa at a cost of 5.5 billion birr.
The factory is currently under construction on a 101 hectares plot of land to brew beer and other beverages like juice and bottled water. For the success of this construction, local contractor called Welabu Construction have been hired to take over the civil work of the factory and have started their operation on the project.
At full capacity, the factory will produce three million hectoliters of beer per annum. The factory is also expected to create job opportunities for 3,500 people.
Previously, Kegna beverages has awarded other German consulting company called Brewtech GmbH through international competitive bid procurement to oversee the feasibility study, development, design and construction of the plant, as well as the installation of the machinery. 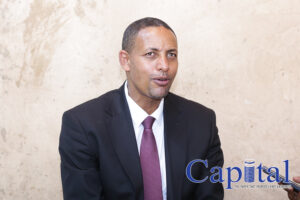 The company has around 5,000 shareholders including farmers. Kegna Beverage S.C, one of the companies that followed the economic revolution in Oromia Regional State has a total authorized capital of 3 billion. Currently the company is working to secure financing for the project.
The Oromia economic revolution is the fruit of Oromia scholars coming together in order to alleviate the economic problems of the region and the country after studying and implementing strategic sectors of the region’s resources.
Other projects under the economic revolution include Oda Integrated Transport, Kegna Agricultural Machinery and Welabu Construction. Kegna has around 5,000 shareholders including farmers, 1.5 billion Br in subscribed capital, of which 700 million Br is paid-up.