Lion Insurance Company registered another success on its operation in the last financial year.
The insurance company has closed the 2020/21 financial year with over 395 million birr in total premium income up over nine million birr compared with the preceding year that ended on June 30, 2020.
The annual report of Lion Insurance stated that the main reason for such increase is related to the strenuous effort of the work units particularly branches and the support of the management and the board.
It added that in relation to the growth in premium, the net earned premium decreased by 3.7 million birr or 1.2 percent to 306.3 million birr from 310 million birr in the previous year same period.
The production portfolio was topped by the motor class of business as usual by taking 59.1 percent of the gross written premium. The remaining balance of 40.9 percent was accounted for not motor class of business while liability class of business contributed 9.1 percent from non-motor classes followed by pecuniary by 8.3 percent.
During the reported financial year, the claims performance has shown that the amount of gross claims paid was 173 million birr, while net claims uncured was 188 million birr which increased by 1.9 percent compared with the year ended on June 30, 2020.
In the year under review, the company loss ratio was 61 percent which was 59.5 percent a year ago. As usual on the insurance sector in the country the motor loss ratio stood at the top by taking 60.3 percent that increased by 5.3 percent compared with the preceding year. 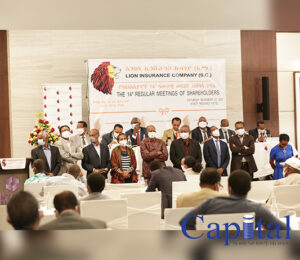