Marathon Motor Engineering announced that it will assemble the first Hyundai electric cars in Ethiopia in a year.
The car dubbed ‘Hyundai Ioniq’ is a compact hatchback with a trio of powertrains. It can charge from home or work, and never stop for gas. On a single charge, the IONIQ electric can travel up to a 200 kilometer range of emissions-free driving.
Melkamu Assefa, CEO and shareholder of Marathon Motor Engineering told Capital that the car model may be changed.
“So far the model we agreed to with South Koreans is ‘Ionic’ but we may change that when we start assembling the car here.
He added that Maratahon is also considering importing a hydrogen fuel cell car after the launching of the ionic car.
Recently Hyundai Group (HMG) started selling a hydrogen fuel cell.
Hyundai Group (HMG), the massive industrial conglomerate that owns Hyundai Motor and Kia Motors, is investing £5.5billion in a plan that will boost production of hydrogen fuel cell systems to 700,000 units annually by 2030.
500,000 of those units will be hydrogen-fuelled commercial and passenger vehicles. HMG expects demand for such vehicles to reach 2 million units a year by then, and demand for hydrogen fuel cells more generally to reach 5.5 to 6.5million units a year. That’s massive.
Only recently Hyundai Motor released the Nexo – a hydrogen-powered SUV based on the group’s first dedicated fuel-cell platform. Over the next few years, HMG says it will keep developing the Nexo’s powertrain to “upgrade and diversify its fuel-cell system lineup, so it can respond to demands from various industry sectors”.
In other related news Marathon’s assembly plant which had been under construction for the last one and half years has started assembling Hyundai cars in Ethiopia.
The company which has been selling cars for the last 10 years has invested half a billion birr to construct the plant which lies on 10,000 square meters of land.
The plant, which was built by Assefa General Contractor, has the capacity to assemble 10,000 cars per year. It employs 70 people now but eventually 1,000 will work there.
Athlete Haile Gebrselassie, shareholder of the company, said that the assembling of the cars is good success of the company as well for the county.
“When we assemble in here we will cut the demand of our foreign currency in addition to creating jobs for people.’’
Marathon Motor Engineering, Plc. is a joint venture between the great long distance runner Haile Gebrselassie and other three Ethiopians. The company was founded in 2009. Currently it has five show rooms in the country. 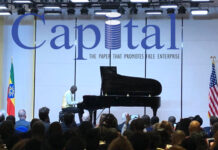 The current process of European integration