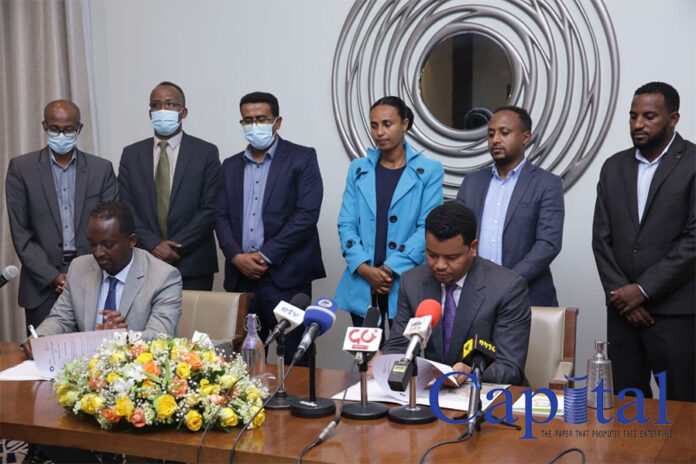 The new era is dawning on the Ethiopian Commodity Exchange (ECX) by introducing strategic mineral trading at its platform besides the traditional agricultural commodities.
The mineral, which currently is backward and offers less contribution for the GDP, will soon change the narrative when trading begins for the first time on the platform on such kind of facility and scheme.
On Friday May 7, the Ministry of Mines and Petroleum (MoMP) and ECX signed a Memorandum of Understanding (MoU) to trade strategic minerals on the ECX trading Platform. The statement ECX sent to Capital stated that the MoU would uplift the mineral trading to be managed on a modern system.
It added that the new path of putting the sector on the system will enable the country to provide the natural commodities to local and international market with high end quality.
The electronic trading platform will introduce the trading of the new type of commodities under the mining trading strategy to benefit the sector actors on its transparency approach.
Under the MoU, the two parties have agreed to work jointly on products international standards and contracts, and developing trading standards, models, market linkage and tracing, processing rules and directives for national mineral trading scheme. Such standards will be developed for different mineral like opal, emerald, sapphire, tantalum, lithium, potash, and others by experts and laboratories comprised from both organizations.
Netsanet Tesfay, Public Relation Head at ECX, told Capital that such activities have already commenced by the two entities.
Assure the intervention of all trading actors on the sector; revising MoMP’s regulatory frameworks to manage the trading properly, digitalize the trading and make inclusive the trading for regional and international players are the areas that will be conducted in the coming months. 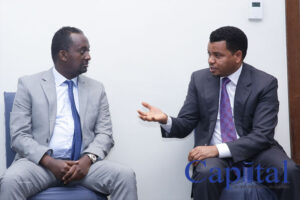 According to the plan trainings in related with qualities production, understanding the trading and understand and evaluating the international market and other will be providing for trading actors.
Netsanet said that the trading will be commenced in a couple of months’ time since preoperational works also includes other stakeholders to follow through as per the schedule. He said that some of the preparation might need the involvement of others, “for instance the legal framework development might include others.”
The current political leadership is taking new paths on the development of the mining sector that was neglected in the past. In the ten year economic development plan, the sector has got prior attention like other major sector to expand its contribution for the economy, job and GDP.
Takele Uma, Minister of MoMP, and Wondimagegnehu Negera, CEO of ECX, have signed the MoU.
“The agreement is to leverage the exchange for commodities such as precious gemstones. This better facilitates international trade by enhancing supply, reducing illegal trade, and creating sustainability,” Takele said.
The minerals that have joined ECX platform would be exportable products. “Starting the trading via ECX will allow the earnings and destinations to be expanded since the quality and the source of the commodities will be clearly seen on the process,” experts explained at the signing ceremony.
Currently, ECX manages the trading of 12 commodities, while almost all of them are food items.
A week ago, Capital reported that ECX was to introduce the trading of spices for the first time at the platform besides the second industrial product, cotton. 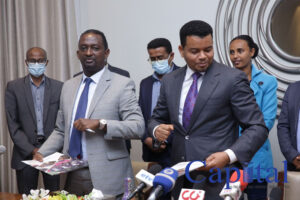 Currently, the spot trading platform is trading soybean, which is considered as an industrial input. The coming of cotton and mineral will make the trading scheme as partner for industries.
In the coming year, the modern trading facility that commenced operation in April 2008 has targeted to include nine agricultural commodities including spices and cotton.