A new initiative, New Life for Civil Servants (NLCS) planning to tackle artificial price hikes and inflation is in the process of coming to fruition after eight years of awareness creation in the society.
NLCS, which formed and was registered at Ministry of Trade and Industry immediately after the removal of the 2011 government price cap plans on including the majority of civil servants and other employees as owners in the market oriented business organ and to supply products at a reasonable profit margin to the general public.
Abel Hailemariam, leader of the initiative said that the lifting of the price caps that were only able to run for five months was the reason for the formation of initiative.
“When the government imposed a price cap for some major consumer products the general public was very happy so it was expected to be continued. However, it is was difficult for the government to do that in the current world order and market economy,” Abel said. He pointed out that the bad side of the price cap was the price hike in the market which occurred immediately after the government lifted the scheme.
“I believe that the government could not control the price or protect the rate; either the private sector or the general public must be involved in the price stabilization,” he explained.
“Due to that I decided to form the initiative that the society who depends on salaries is involved in,” he added.
For the last eight years the 11 founders, focused on awareness creation in different government and private offices.
According to the plan the initiative, which is a profitable business entity, will include all salary based groups of the society which is estimated to be over five million under the government and private structure.
NLCS has targeted 7,000 birr as a minimum share sell and 25,000 birr for the maximum.
“The civil servants or other workers at the private sector and public enterprises would not buy shares more than the stated amount,” Abel said.
He also stated that based on the current reality the minimum investment, which is seven thousand birr, would be hard for most Ethiopian workers to afford. “Based on our plan financial institutions will pay for the civil servants or other workers by collecting 100 birr from their salary, every month for six years,” he elaborated.
“Before we begin collecting the money we have spoken with several public institutions from the higher level to the kebele and explained the idea in Addis Ababa and it has been approved of by the public. For instance, labour unions at Ethiopian Airlines and Commercial Bank of Ethiopia have decided to invest on behalf of their members, while Africa Insurance has promised to buy the 25,000 birr share for each of its staff. At the same time local and foreign financial firms are expected to provide the finance for workers by their wage guarantee.”
“We expect the government to back the scheme by facilitating suitable policy conditions, like providing a guarantee to access finance from abroad; and facilities like stores or shops in different areas; otherwise we do not need any support from the government,” one of the founders said.
He said that they have already talked to financers from abroad to who are interested to provide finance with almost zero interest but it needs government approval.
According to the plan the initiative would begin operating in Addis Ababa, which is the major hub for civil servants and other workers, while the share will be sold in every corner of the country under their structure.
NLCS will also supply products from local and international sources and distribute the product to retail shops that will be formed for this purpose in every kebele.
“Based on our plan up to five retail shops that sell our products will be formed by youth, and women and at the same time it will create jobs,” Abel explained.
According to Abel, currently there are consumers associations at the kebele level but they will not meet the expected target because the supply does not meet the demand or products are supplied based on government subsidy but illegally smuggled to traders. “Unlike the association we will supply ample products that shall stabilize the market and tackle corruption,” Abel said.
“NLCS will collect a large amount of capital that will meet the demand,” he added.
He said that they have evaluated the failure of Alle, the wholesaler public enterprise that had the goal of stabilizing the market. “The major challenge for Alle was lack of finance, a long decision making process and working in the wholesale business as opposed to its plan to retail commodities,” he said. “Due to the stated reasons the enterprises could not win its target but in our case we will have huge capital and directly distribute to retail shops that are registered under the scheme,” he explained.
Currently employees would not push their employers to get more income but they can win the traders, because of that they should organize and form their strong market institution that would also help the traders to sell products at a reasonable price, according to experts. Due to that such kind of market would ease the life of the general public.
According to the assessment about 1.5 million residents in Addis Ababa registered for the payroll, while Ethiopia has about 3.1 million civil servants and there are hundreds of thousands of security and public enterprise workers.

Ethio Lease hands over $7 m worth agricultural mechanization equipment to... 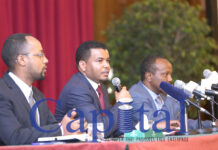