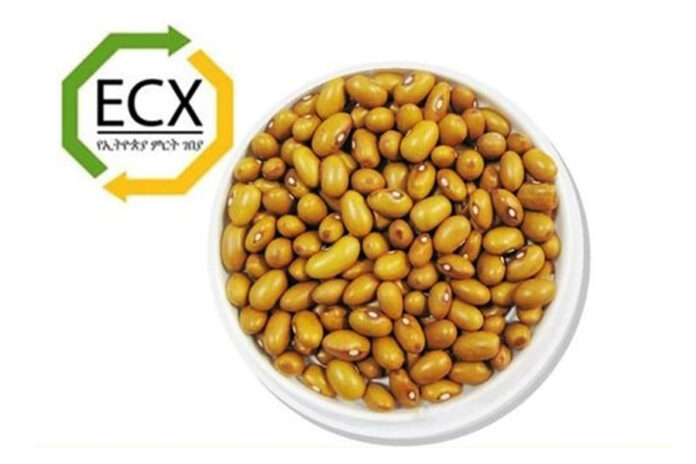 The adding of a new commodity to the Ethiopian Commodity Exchange (ECX) in its trading floor is expected to boost the production of beans and the corresponding market.
The electronic trading platform announced that it is going to start the trading of yellow unspeckled beans, which is the third for the budget year alone for exclusive trading at ECX.
In the past couple of years the trend has shown that when new commodities start trading at the modern trading scheme, the production, value, quality or export starts to climb.
Netsanet Tesfaye, Public Relation Head at ECX, said the experience indicated that when products started trading at ECX the harvest, quality and price increased. He reminded that the soybean and mung beans production have shown price spike since they joined the electronic trading floor.
When mung beans started under exclusive trading at ECX the production was mainly concentrated at the central part of the country, but it went on to immediately spread in other parts of the country mainly at the north western and western part of the country.
“In the 2016/17 harvest season, the production of soybean was 812, 000 quintal which has now boosted to 1.3 million quintals in past year. Starting the trading of the industrial bean at ECX is one of the major factors for the production increment,” Netsanet stated illustrating the figures on the soybean sector, which is now mainly traded for local agro processing industries with competitive price that benefited the farmers.
Latest information indicated that the production of soybean has surpassed two million quintal.
“Now local edible oil pressers are giving better price for the farmer than export value for soybean farmers, which encourages the producers to come up with high yield and better quality,” he added.
“Definitely, the production and value of yellow unspeckled beans, which is the family of pinto beans, will increase,” he told Capital.
The exchange stated on Thursday April 8, that it has already received 1,000 quintal of yellow unspeckled beans via its Bule Horra branch, which is a recently opened facility with a warehouse holding capacity of 150,000 quintal. Netsanet said that the product will also be coming at the warehouse of ECX at Wolayta Sodo.
ECX indicated that more stock will be added in the coming days. Due to that it called traders to be ready for the trading that will be commenced in the near future.
The yellow unspeckled bean is one of the most accepted pulses in the global market, mainly in South East Asia. So far it is mainly produced in the southern and south western parts of Ethiopia. Ethiopia’s pinto beans export volume in the 2018/19 budget year was 2,981 metric tons which has since then expanded to 7,801 metric tons in the 2019/20 export year.
Netsanet said that there are seven beans under the pinto beans family that includes black unspeckled beans and creamy unspeckled beans.
He added that mostly the beans are produced in southern part of the country of which the warehouses at Bule Hora, Wolayta Sodo and Hawassa mainly receive the product. He said that the products have demand at the export market. The beans production has increased from time to time since it has received attention by Ethiopian Institute of Agriculture Research.
Ethiopian pinto beans export main destination include; India, Pakistan, Kenya and Tanzania.
ECX that manages the trading of over 700,000 metric tons of commodities every year is trading about 13 products. Recently, it added the trading of red speckled beans/pinto beans and white pigeon pea.