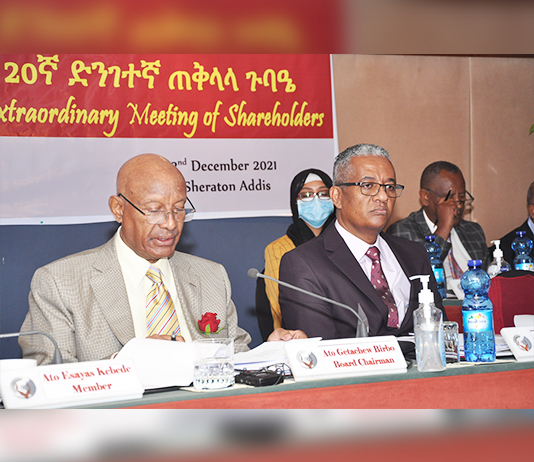 Nyala Insurance S.C. (NISCO) disclosed that it has recorded a gross profit of birr 194.4 million from its general and long-term insurance operations, an increase of 30.2 per cent compared to the previous fiscal year.
As it has been done in the past consecutive years, the shareholders have also unanimously agreed Birr 100 million to be retained from the net profit in order to increase the paid-up capital of the company to over Birr 700 million.
During his presentation on the company’s annual performance report to the company’s shareholders who attended the 27th General and the 20th Extra Ordinary General Meeting held at Sheraton Addis on 2nd December 2021, Getachew Birbo, the Chairman of the Board of Directors, said that regardless of the frequent challenges and difficulties happened to the nation NISCO has realized outstanding achievements as compared against the preceding fiscal year.
According to the chairman’s report, the underwriting surplus generated from the general insurance businesses has surpassed Birr 160 million, showing a total growth of 30.6 per cent as weighed against the preceding achievements.
Likewise, the chairman underscored that NISCO also registered a 12 per cent growth in its long-term (life and health) insurance business and thereby secured Birr 112.9 million, and added the total asset of the company stood at Birr 2.5 billion, an increase of 12.7 per cent over the previous fiscal year. 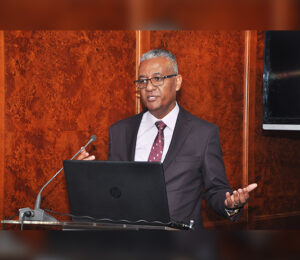 On the other hand, the net claims of the company slightly increased from about Birr 175.3 million to Birr 183.1 million, he outlined. Consequently, the loss ratio of the general insurance resulted at 38 per cent, a 10 per cent decrease compared to the previous production period.
The chairman added that the reasons for the remarkable achievements in the premium income were due to the company’s prudent underwriting practices, implementation of business innovations based on the customers’ needs and demands.
Yared Mola, the Chief Executive Officer of Nyala Insurance S.C., on his part underlined that Nyala Insurance is embarking on digital insurance services. He added that the company has availed one fully digitalized service and is dedicatedly working to add more.
Yared emphasized that the success of tomorrow’s insurance business is heavily dependent on how the company is accessible to the digital natives.
Established in 1995 with a paid-up capital of Birr 7 million, NISCO has recently launched the first of its kind insurance product in Ethiopia, named ለ-Mobiሌ (for my mobile). This policy is systematically designed to effectively meet the growing needs and demands of those who want to protect and insure their smartphones apparatuses against all accidental losses, screen damages, breakdowns and thefts, without having any face- to- face transaction.