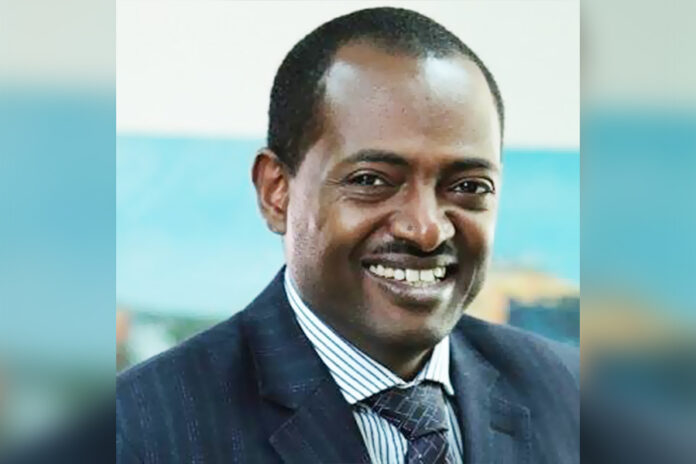 The American Chamber of Commerce has expressed its concern on the latest move of US government on Ethiopia that threatens to impose economic sanction and may suspended the country for African Growth and Opportunity Act (AGOA) pact.
Over a million employees will permanently loss their jobs, if the country becomes ineligible for the AGOA pact.
The business executives, at a press briefing that was held on Wednesday, September 29, 2021, at Radisson BLU Hotel, requested all relevant stakeholders to positively engage in a sustainable trade relationship between Ethiopia and US. The executives also urged the importance of US-ET trade connection and the critical need to renew Ethiopia’s AGOA eligibility in 2022 and beyond.
American Chamber of Commerce has more than 100 US affiliates companies that invest in Ethiopia or have commercial partnership with Ethiopian business like the aviation industry.
Ermias Eshetu, Board President of American Chamber of Commerce, said that member companies which invested in Ethiopia have been affected in the past two years because of the global pandemic, coronavirus.
“Most of the member companies’ investments that engaged on various sectors including the textile and garment sector have been gravely affected by the pandemic, while they have been supported through different instruments at least to keep their employees that are mostly women from lay off,” he said.
“If the current policy direction of the US government that is threatening to exclude Ethiopia from AGOA would continue it would devastate the activity of companies and the investment climate in Ethiopia,” Ermias expressed his concern.
Ermias reminds that meanwhile the AGOA pact, which provides duty-free treatment to goods of designated sub-Saharan African countries, despite coming into force two decades ago Ethiopia did not exploit the opportunity properly because of capacity, “but in the past few years the export through AGOA is growing since the number of investments increased and even the country has established facilities like industry parks.”
The two countries have had good trade relation that is growing throughout the time mainly Ethiopia is importing high end industrial outputs like aircraft and aircraft parts worth over USD 1.6 billion per annum.
Similarly, in the past about ten years to access the AGOA opportunity, Ethiopia invested massively to enhance its industrial capacity including by borrowing foreign funds for the construction of industrial parks to produce and export commodities to US consumers.
The board President said that it takes time to brew fruit and that the time has just arrived to benefit from the AGOA opportunity, while COVID 19 has been lagging the activity of industries, which invested huge sum and manage huge skilled labour including those who trained abroad on the aim to meet the standard of US market.
“It was uncertain economic challenges for investors that I represent and it was mitigated in different schemes. Now the current situation that come with US policy has become a grave concern for our member companies that includes global giants,” he said.
The foundation on industrialization has been seen and it is expected to benefit the youth and women more, while the current US direction would have effect on all direction.
The business leaders who are representing different business sectors benefiting directly and indirectly from the AGOA opportunity, stated that the continuation of Ethiopian eligibility to this act would promote the long-lasting trade and investment relationship between the US and Ethiopia.
It is also stated that this opportunity is a primary mechanism being utilized to promote mutual partnership between the two nations, to enhance bilateral economic and security interests, as well as to spread democratic values.
The prominent entrepreneur and owner of SoleRebels, Bethlehem Tilahun, said that AGOA has created conducive environment for her success and enabled to create jobs for 320 women with high salary, “and other women like me, who engage like on handcraft, have similarly benefited from the pact and their employee are generating revenue and send their children to school.”
“If you go to the industry parks which have facilitated the opportunity for young women and similarly industrialists and their customers in the US who have benefited from the affordable prices, it is evident that such kind of trade relations should continue,” she explained.
Zemedeneh Negatu, Global Chairman Fairfax African Fund, said that because of the opportunity that the US gives for some 38 African countries, huge companies are invested in Ethiopia to tap the opportunity.
“There is pressure on the US policy makers to make Ethiopia ineligible from AGOA but I believe the US government would step back from this direction. We have not properly utilized the pact meanwhile factories from different countries have set their plant in Ethiopia to gain from the tax advantage, but the implication is that if the US government decides Ethiopia to be ineligible these plants shall flow to other countries which have the benefit of the pact,” Zemedeneh says, adding, “and they will never come back once the global supply chain is broken. And this will permanently make hundreds of thousand women unemployed.”
Export to the US via AGOA has only begun to materialize in recent years. For instance from total export of USD 256 million in 2020/21 only USD 114 million was via AGOA – Ethiopia has not yet fully benefited from its capital investment and infrastructure built for AGOA.
He explained that he and other Ethiopian diaspora are approaching the US government and policy makers and show the picture of how it would have an effect if the country was excluded from AGOA. He reminds that on one side, under poverty alleviation scheme of the US government is providing major aid for Ethiopia and on the other side creating permanent unemployment by rejecting Ethiopia from the pact “this is the paradox that we are explaining for US officials.”
Companies like PVH, Corteva, Dow, and Boeing are members of the American Chamber of Commerce who have business activities in Ethiopia.