Human Papilloma Virus (HPV), a group of viruses that are extremely common worldwide, kills more than 80,000 women in Africa.
This figure was reported at a press conference in Addis Ababa on the outcomes of the Africa Human Papillomavirus (HPV) Summit on Thursday, October 3, 2019.
Cervical cancer is caused by sexually acquired infection via certain types of HPV which cause 70 percent of cervical cancers and pre-cancerous cervical lesions.
According to the report, there are more than 100 types of HPV, of which at least 14 are high risk type cancer-causing, which is mainly transmitted through sexual contact. Most people are infected with HPV shortly after the onset of sexual activity.
“There is also evidence linking HPV with cancers of the anus, vulva, vagina, penis and oropharynx,” said Phionah Atuhebwe, New vaccine Introduction Medical Officer at WHO regional office based in Congo Brazzaville.
Cervical cancer is the second most common cancer in women aged 15 to 44 living in less developed countries. So far, only 14 African countries have begun HPV vaccines and 12 percent of low-income countries have started the HPV vaccine.
In 2018, approximately 311 000 women around the world died from cervical cancer; more than 85 percent of these deaths occurring in low- and middle-income countries.
In Ethiopia HPV vaccines were given in two regions namely Somalia and Tigray which also struggled with cholera.
Who recommends, screening and treatment of pre-cancer lesions in women who are 30 years or older, as a cost-Effective way to prevent cervical cancer.
Cervical cancer can be cured if diagnosed at an early stage. Clinical trials and post-marketing surveillance have shown that HPV vaccines are very safe and effective in preventing infections with HPV infections.
There are currently 3 vaccines protecting against both HPV, however the costs are expensive, up to 200 USD for one dose.
For countries that are eligible for the Gavi, Immunization Alliance, the cost will be reduced to around 9 USD.
Africa has an estimated population of 372.2 million women aged 15 years and older who are at risk of developing cervical cancer.
As a good success story, so far, Rwanda became the first low-income country to provide universal access to the HPV vaccine and the first African country to begin an HPV national roll-out with Gavi support.
To prevent the spread of HPV, WHO recommended that teenagers and young adults ages 11–27 should get vaccinated against the virus.
“Cervical cancer is one of the few cancers that can be eradicated. However, Africa’s burden in fighting other diseases like Malaria, Ebola, and Cholera hindered the move in the immunization endeavor, in addition to the lack of leadership commitment and advocacy,” she said.

NBE issues directive that allows the diaspora to buy shares in... 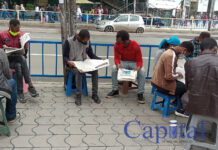