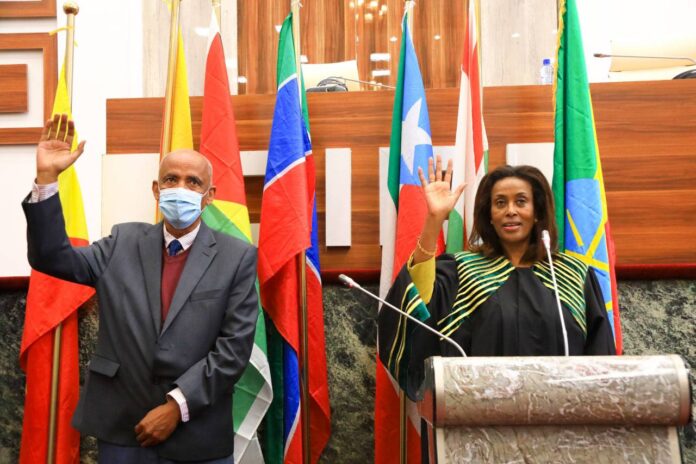 The 2nd extra-ordinary session of the House of Peoples’ Representatives (HoPR) held on Monday February 21 ratified the nomination of the National Dialogue Commissioner’s assignment.
On December 29, the HoPR approved the Proclamation No. 1265/2014 to establish the National Dialogue Commission. Following that, commissioners were selected by the people of Ethiopia with their appointments awaiting vetting and approval by the parliament. Religious elders, civic associations, leadership of the contesting political parties and public figures were said to be part of the whole process.
On January, the HoPR issued a shortlist of 42 people out of the 600 names that were nominated by the public. During the extra-ordinary session of the day, the HoPR approved the nomination of the aforementioned eleven nominees which was ratified by a majority vote and five abstains.
Professor Mesfin Araya, was then appointed as Commissioner Chairperson whilst Hirut Gebreselassie was given the Deputy Commissioner position.
Tegegnework Getu (PhD), Ambassador Ayrorit Mohammed (PhD), Blen Gebremedhin, Yonas Adaye (PhD), Zegeye Asfaw, Melaku Woldemariam, Ambassador Mohammed Dirir, Mulugeta Ago, Ambaye Ogatto (PhD) were also appointed as members of the commission.
The nationwide dialogue is said to bring together the various political interests in the country, in order to facilitate an all-inclusive national dialogue. The commission will be an impartial and independent organ of the Federal Government with its own legal personality and is to be accountable to the HoPR. 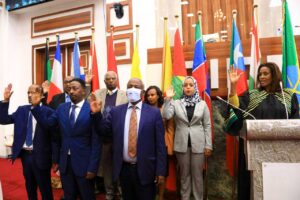 According to the proclamation, the term of the office is three years though if necessary the term may be extended by the HoPR. As experts suggest, the dialogue could take from three to five years.
The commission bears the responsibility to craft the agenda for the dialogue, organize the dialogues and facilitate deliberations and organize and convene dialogue forums at the federal and regional levels that would bring about national consensus with the participation of representatives of various segments of society drawn from the entire country after identifying and enabling participants to take part at a national dialogue conference in accordance with clear criteria and procedures.
As indicated on the draft, the Commission shall have eleven commissioners, appointed by the HoPR based upon nomination by the Prime Minister; with commissioners not having affiliations to any political party.
Commissioners are set to have immunity from criminal prosecution during the course of their service unless one is caught in flagrante delicto or one’s immunity is stripped by the HoPR.
Regarding the budget, the commission is said to get its budget from the government. Notwithstanding, the Commission may collect fund from other provision legal sources as well.