Prime Minister Abiy Ahmed has officially launched the 12km section of the 56km ‘Beautifying Sheger Project’ funded by Chinese government on October 1, 2019.
The Beautifying Sheger Project is a three-year initiative of the Prime Minister aimed at elevating the city to a site of urban tourism by rehabilitating water bodies.
The first phase of the project will be built by the China Communications Construction Company (CCCC) with a grant secured earlier this year from the Chinese Government.
The Premier has discussed the plan with the engineers of China Urban Construction Design and Research Institute during his visit to China some months ago while attending the Belt and Road Forum.
The Beautifying Sheger project runs along the rivers of Addis Ababa, developing 56km of green spaces starting from Entoto to Akaki which is believed to cost 29 billion birr.
The first part of the Chinese funded section should cost 50 million USD and take eight months.
“We are behind you Prime Minister,” said Tan Jingmin ambassador of China to Ethiopia. “We will help to build this Sheger project a land mark in Ethiopia as well as in Africa.”
This part of the Beautifying Sheger Project includes the construction of Central Square and treatment of 12 km of river running from Entoto Mountain to Peacock which includes cleaning up and rehabilitating the river side.
“The project is intended to make Addis Ababa live up to its name,” the PM said.
“Ethiopia’s existence and prosperity relies on the hard work and commitment of its people and nothing can deter Ethiopia’s journey towards prosperity,” stressed Prime Minister Abiy.
A fundraising dinner called, ‘Dine for Sheger’ in May to mobilize resources for the implementation of the project, brought business owners, company CEOs, international organizations, heads and members of the diplomatic community and countries to buy tickets at 5,000,000 Birr per plate raising over 1.2 billion birr.
“I personally will follow the project every single day to deliver as it is promised,” said the Prime Minister.
According to the officials from CCCC, more than 200 Chinese professionals will work together with Ethiopians 24 hours a day to execute the projects on time.
The second one is scheduled to begin after three months and end in the second quarter of 2021 and involves the construction of central plaza which includes the palace of science and technology as well as children’s paradise and art garden.
Senior government officials, including the Minister of Finance, Ahmed Shide, Minister of Water, Irrigation and Energy, Seleshi Bekele, and Deputy Mayor of Addis Ababa city, Takele Uma, attended the launching ceremony of the project.
Presently, the green cover of Addis Ababa is estimated to be 0.3 meter square per capita and the sheger project is expected to lift the per capita to seven square meters. 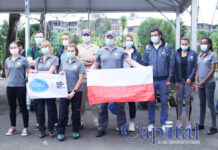