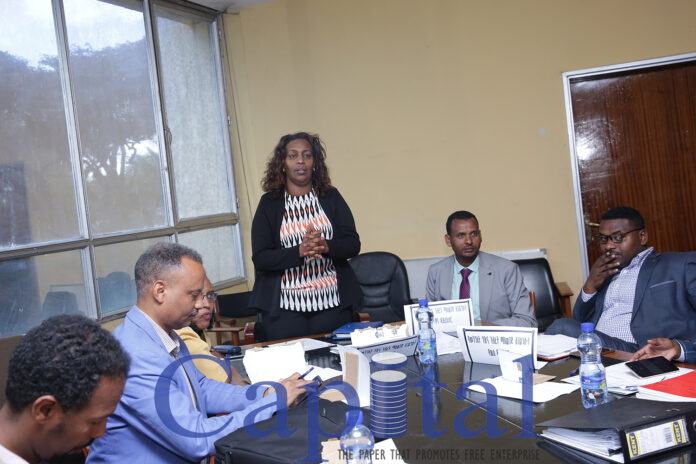 The Service that is responsible to procurement massive services and commodities for the federal government has introduced new strategy on the aim to expand transparency on the post procurement procedure.

On Thursday January 2 the procurement committee, relevant government office representatives and officials of PPPDS including the Director General, Tsewaye Mulunen, who chaired the evaluation, have been reviewed the claim of 12 companies who disqualified from the bid process, while they were filed their argument for the exclusion of them from the bid.

Tswaye said the aim of evaluating the claim on face to face is to create clarity and transparency before giving final written decision.

On the day the claim of Biftu Adungna, DCL Trading, Amlotec plc, Imperial ICT Solution, Maxi Tech Trading, Maf International plc,  Agrocorp International,  RKAD, BESC Limited, Nanodas, HNJ have been tabled and except Biftu case all of them evaluated and some of the claim have got accepted by the bid technical committee. However the Director General disclosed that the written response for the claim will be disclosed in the next day (Friday January 3) whether it is accepted or not.

Tsewaye told Capital that such kind of face to face evaluation introduced on the coming of her to the position. She assigned as head of PPPDS, which is under Ministry of Finance, about half a year ago.

“The latest events is differ due to it was open for media, who are interested on reporting on the bid that PPPDS manages,” she added, while on Friday via phone call she declined to give the final decision of the claims.

At the claim evaluation the international bid for IT equipment and toners that undertaken on two envelops system that is under technical evaluation stage and on strategic product procurement category the wheat bid that held on single envelop system, which means technical and financial offers delivered jointly have been observed.

Tsewaye said that the aim of the open evaluation of claims is to fill the principle of responsibility, accountability and fairness.

Most of the claims that got acceptance on the day have been related with the IT sector, while the claims of three companies on the latest wheat procurement were not sound for technical committee meanwhile the final decision will be given the higher evaluating committee.

On the day Tesfaye Urge who represents two companies, who participated on two different wheat bids, has been claimed that one of the bid document his company has been attached the certificate analysis that is in Russki.

The technical committee representative said that the specification space of the bid did not filled, while it stated attached laboratory analysis, while it is not English language document.

The 2010 public procurement directive article 16/13.1 B stated that ‘for procurements to be conducted by means of international competitive bidding, all documents shall be prepared in English language’.

The other milling wheat claim filled by Agrocorp has been also evaluated on the day. The company represented by Ali Yahya claimed that it has been disqualified from the bid by minor error that the company failed to attach technical specification for aflatoxin/mycotoxin levels, levels of heavy metals, pesticide residue levels and microbiological load that are stated on the second amendment of the procurement.

The representative has also mentioned this to argue and stated that his company has been offered good price on the wheat bid that is procured for Ethiopian Trading Businesses Corporation to stabilize the market.

Tsewaye said that as per the recommendation from the higher and technical bodies the issue of aflatoxin that is become hazardous for the health of the society has become priority on such procurements.

Technical committee stated that it is the mandatory technical requirement that could not be seen as minor error and asked for clarification.