The coming of new pulses at the Ethiopian Commodity Exchange (ECX) is expected to make it uniform at the trading.
The trading floor established in 2008 and started exclusive trading by coffee has disclosed that by this coming Ethiopian New Year it will add more pulses in the electronic trading floor.
So far ECX is trading five commodities including sesame seeds and soybean, which joined the market lately.
Last week ECX disclosed that it will commence the trading of red speckled beans/pinto beans and white pigeon pea, which are stated as a potential to generate more hard currency.
Exporters told Capital that the products particularly the coming of red speckled beans/pinto beans, which has six varieties; red white, white red, white gray, creamy red, un-speckled creamy, and un-speckled yellow will create an opportunity to harmonize the beans market.
The coming of new products at ECX will also help to control the trading of white pea bean, according to exporters, who demand anonymity.
“The beans and peas have potentials to expand. The trading will also help to uniform the pulse market,” the exporters said.
“For instance traders that are engaged on illegal activity are buying white pea beans from primary market against the trading rule and claimed that the product is red speckled beans/pinto beans,” an exporter said adding, “now the pulse trading becomes uniform and exporters would not have a chance to abuse the system.”
“Further more the market will be sustainable and determined by global market besides bypassing illegal brokers,” the exporters added.
On the other hand the decision of Ministry of Trade and Industry to facilitate special window at ECX for local soybean users is also a result of strong control of the government to cut the contraband, according to the sector actors.
They said that illegal exporters were engaged on buying the product from primary market even though the product is exclusively traded at ECX for over two years. “The strong control of the government on the illegal activity forced the illegal actors to use to trade their soybean via ECX,” exporters said. Besides those local soybean users, mostly processers were also trying to abuse the scheme, according to exporters.
“The illegal actors have been aggressively engaged on illegal activity and buying the product from primary market. Though the government issued a directive to enforce the trading at ECX, there were sabotages to paralyze the directive,” they added.
The government tightens its control that pushed the illegal actors to look to trade via ECX, according to the sector experts.
“That is the reason they asked the government to create a window at the ECX to return the product that they stored illegally,” exporters said.
Now the ministry has given a grace period until September for illegally stored product to return at ECX warehouse via suppliers. 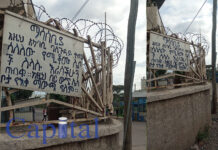