The president of Equatorial Guinea Teodoro Obiang Nguema Mbasogo spent three days in Addis Ababa where he signed a cooperation agreement with Prime Minister Hailemariam Dessalegn.
The two countries agreed to work together to recruit workers, develop infrastructure and increase defense. The president, who came with a business delegation, said his country will strengthen its ties to do a better job than before.
Hailemariam said “we have agreed to work very closely on an international agenda. Now both of us are members of the UN Security Council and we will take the African agenda together for the issues we have to the United Nation Security Council. As the president is the most pan-African leader I think this agenda will be worked out together,” he said.
The President also visited the Addis Ababa City Administration and held talks with officials of the Administration.
The bilateral ties between the two countries started in the 1970’s. Equatorial Guinea is also one of Africa’s largest oil exporters. 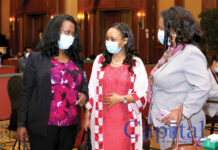