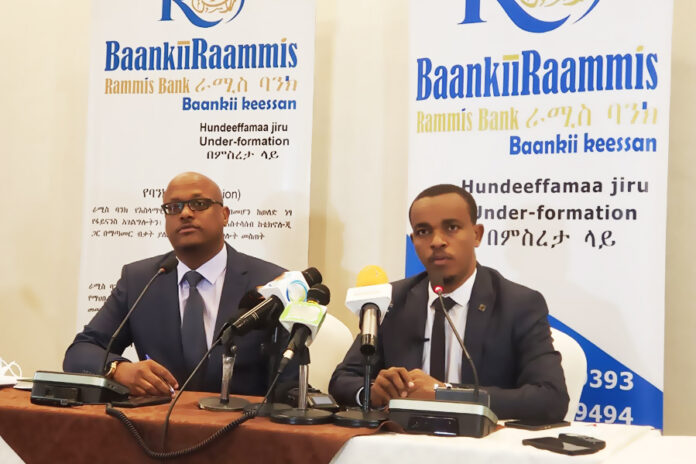 The under formation Ramis Bank announces that it has successfully accomplished the resource collection to meet the deadline of National Bank of Ethiopia (NBE), which gave six months for the under formation banks to file its request for the license with the capital of half a billion birr.
In April, NBE had revised the minimum paid up capital of the banking industry from 500 million birr to five billion birr. But, under ‘minimum capital requirement for banks: directive no. SBB/78/2021’ it has called banks that are on their formation process to finalize their process with 500 million birr paid capital and request for license until October 12.
As per its process, Ramis which got the name from one of the biggest tributary of Wabi Shebele River and the largest river in eastern Ethiopia said that it has successfully secured 724 million birr paid up capital to realize its operation.
Abduljewad Mohamed, Lead Promoter of Ramis Bank, said that the amount floated for share sales in general was two billion birr of which so far 724 million birr has already paid.
The amount that the under formation bank collected is higher by 50 percent than compared with the requirement of NBE.
Based on the process, Ramis is expected to undertake the founding general assembly prior to filing its application for license.
“We have got the go ahead from the regulatory body, NBE, to conduct the founding general assembly and we have already called shareholders for the meeting that is scheduled to be held on October 2,” Ibsa Boru, who is supporting the organizers of the bank on the back to become operational.
According to Abduljewad as an interest free bank (IFB), Ramis would focus on investment banking concepts, “one of that is we would give priority for agricultural investment similar to other services.”
As per the latest information, about six thousand shareholders have been involved on the bank that is expects additional instrument on the IFB that is recently permitted and until now two are operational.
“Under the share selling, COVID 19 has been a serious obstacle with other minor challenges, while we have achieved our target,” Abduljewad said.
Ramis that officially started its formation process in September 2019 is now on the final stage, “as per the plan the bank will be operational swiftly since it got a green light from NBE.”
Currently, Zamzam and Hijra are fully IFB banks and have commenced operation in the past fiscal year. However there are conventional and IFB financial firms that are on the process to join on the business, while the deadline for NBE requirement is nearing.
Recently, NBE announced that it will not give any extension for the under formation banks to come up with the required capital until the second week of October.
Yinager Dessie, Governor of NBE, said that there are some under formation banks that are tirelessly working to come up with the requirement and some others are in difficulty to amass to the amount, “we will never give extensions due to that they have to come as per the period.”