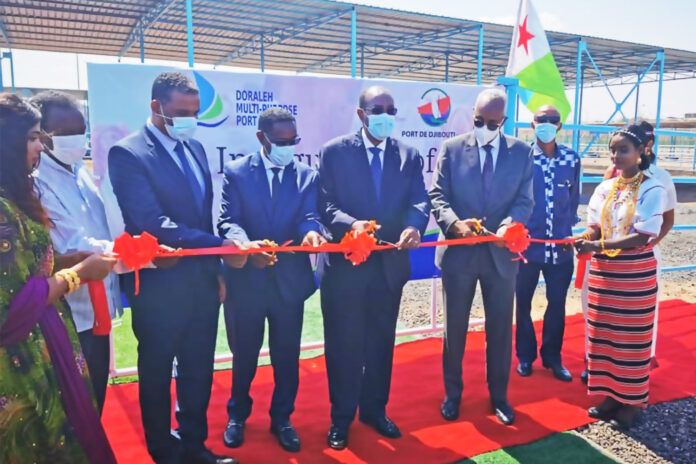 Ethiopia welcomes the new livestock terminal at Doraleh Multipurpose Port (DMP) of Djibouti by stating it will strengthen the economies of the two nations
The terminal that constructed inside the modern port facility at Doraleh has been officially inaugurated in the visit of Ethiopian high-level delegation that led by His Excellency Omer Hussein, Minister of Agriculture.
At the inauguration ceremony His Excellency Omar said that the new facility will have additional input for strengthen the economy of Ethiopia and Djibouti.
He appreciated the effort of the port leadership for the accomplishment of the facility.
“I would like to appreciate you on your efforts and your commitment to building this new stockyard in such a short time,” he said.
The information Capital obtained from DMP indicated that the project was commenced in April 2020 and it had consumed USD 400,000.
“This project will inevitably strengthen the economies of our two countries. This will also help strengthen relations between Ethiopia and Djibouti,” he added.
He underlined that the livestock sector would play big role for Ethiopia, “Ethiopia has the largest stock of live animals in Africa. The potential of the livestock industry can potentially reduce food and nutrition insecurity, poverty.”
The recently added to the services offered by DMP, the export capacity of this new terminal is 2.5 million cattle per year; and the area of the first phase is 27, 515 square meters.
Regarding site capacity per day it shall manage 1,000 heads of camel, 500 heads of cattle 4,270 heads of goat or sheep at the current phase that will be expanded in the coming expansion projects. According to DMP, unique in the region, this terminal will have a direct impact on the creation of direct and indirect jobs.
The terminal also has various structures suitable for the export of sheep, cattle, goats and camels, while new facility is viable with the railway system of Ethio Djibouti Railway.
“The construction of the second phase will radically increase the volume of exports and I would like to take this opportunity to congratulate the authorities of the Ports and Free Zones for their commitment,” the Agriculture Minister said.
“We are now at the ‘Port Polyvalent of Doraleh’ and more precisely where the cattle from Ethiopia will be unloaded, before being transported by vessel,” His Excellency Moussa Mohamed says at the inauguration ceremony, “As Minister of Transport and also acting Minister of Agriculture, I am here alongside the Port and Free Zone Authority exposing to our Ethiopian friends the livestock capacities of this new terminal; a 2.5 million heads per year capacity. We also showed them the places intended to welcome them but also to treat them, we also discussed the unloading schedules which were reduced drastically.”
The delegation also visited the operations in progress at the DMP bulk terminal.
At the inauguration and visit the new livestock terminal as well as the latest operational achievements of the solid bulk terminal was introduced by Mrs Habon Abdourahman Cher, Chief Commercial Officer of DMP and Mr Idriss Douhour Ahmed, Deputy Chief Operations Officer.
At the ceremony His Excellency Moussa Mohamed Ahmed was accompanied by Mr Aboubaker Omar Hadi, Chairperson of the Ports and Free Zones Authority of Djibouti, Director General of PDSA-DMP, Mr Djama Ibrahim Darar and other were also present including the secretary general of the Minister of Agriculture Mr Ibrahim.
His Excellency Omar Hussein was accompanied by others including His Excellency Ayinalem Niguse, State Minister of Agriculture, Mr Roba Megersa, CEO of Ethiopian Shipping and Logistics Service Enterprise and Mr Kefale Woldemariam, CEO of Agricultural Workers’ Corporations. Inaugurated in May 2017, the Doraleh Multipurpose Port was designed to relieve congestion at the former historical port of Djibouti.
The DMP accommodates vessels with up to 100,000 DWT and boasts some of the most modern facilities in Africa.
The facility that received USD 590 million in investment cost has a range of terminals that including bulk, break, container and RoRo, and it has 1,200 meters of quay line, accommodating 6 berths with a depth of 15.3 meter.