The transition to Sinqe Bank 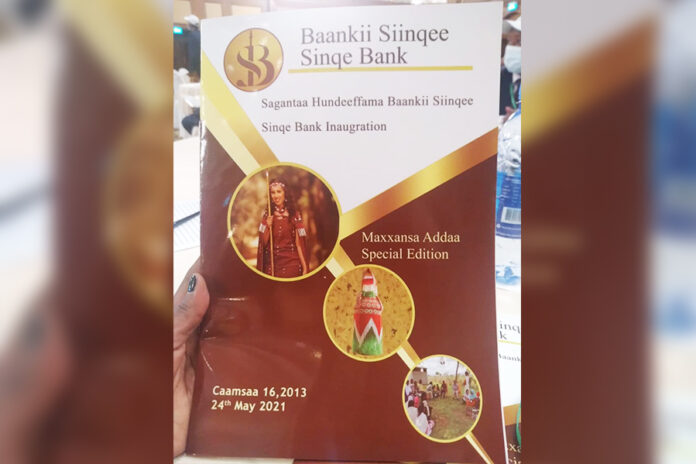 With a subscribed capital of 15 billion birr and a paid up capital of 7 billion birr, Oromia credit and saving share company has relicensed to provide banking service in consort with its long existing microfinance wing based on the proclamation no 626/2009 and national bank of Ethiopia directive no SBB/74/2020. The company has also been renamed to Sinqe bank called after the cultural institution of Oromo women.
To have its own building, the new incoming bank has awarded Samcon Construction Plc for the construction of its building located at Bole around Adamat Hotel which is expected to be completed in two years’ time.
Following the directive of the National Bank of Ethiopia (NBE) issued last year, allowing microfinance institutions to evolve into commercial banks with a two-year transition period executives of the microfinance made the transformation from microfinance to banking service with not discounting the microfinance operation
“The primary goal of the relicensing is to realize inclusive services to all withstanding the microfinance service targeting job creation and financing to the poor and incorporate larger financial seekers as well,” said Zewde Teffera, chairperson of the bank on shareholders annual meeting held on Monday May 24 2021 at Sheraton Addis hotel. “Purpose of the establishment is inaccessibility of contemporary financial service to the rural people in the region that contribute for their impoverishment,” the chairperson added.
Following the issuance of proclamation no.40/1996 proclamation that determines the licensing and supervision of micro finance institutions, Oromia credit and saving Share Company was established in August 1997 to give micro finance service obtaining operational from the National Bank of Ethiopia and trading license from the federal ministry of trade and industry. The five founders and shareholders of the company were Oromia National Regional State, Oromo Self-Help Organization, Dinsho Trading PLC, Oromia Development Association and the late president of Oromia regional state, Alemayehu Atomsa. The company started its operation with 5.2 million which in the last 23 years has grown to 7 billion while its asset has reached birr 15.4 billion in this fiscal year, the paid-up capital of Oromia Credit stood at 679 million Birr as of October 2020.
Currently, the company has more than 400 full-fledged branches, as Zewde tells Capital. When it becomes operational, the bank will start giving its services with about 60-70 branches. “The new bank is expected to enter in the financial market soon as the national bank ratifies its establishment. The bank will continue to strength its microfinance services to low income people, farmers and unemployed youths combined with its full banking service,” added Zewde.
“The bank will certainly contribute to economic growth by mobilizing potential financial resources in the region as well as in the region by providing state of art financial services equipped with contemporary financial technologies,” said Shimels Abdisa president of Oromia Regional State, at the shareholders meeting.
Oromia Credit will be the second microfinance institution to initiate the transition into a bank, following the Amhara Credit & Saving Institution (ACSI).