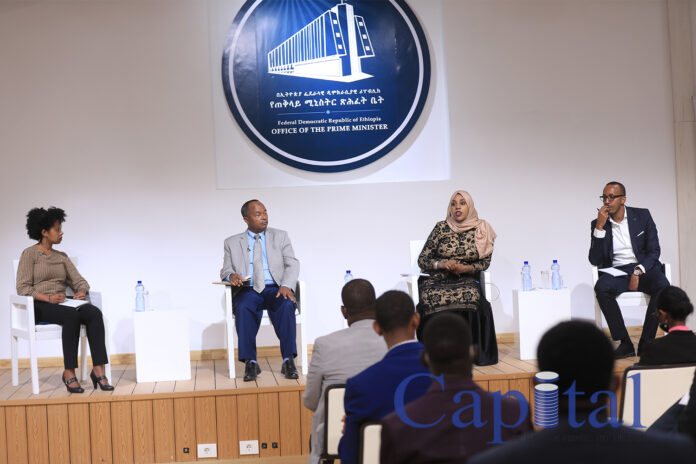 Pastoralists set to benefit from the inclusivity

Ministry of Agriculture (MoA) is revising a two decade old agricultural rural development policy in taking into account the latest context on the sector with ten major pillars. The new policy will promote inclusive development in the agriculture sector with the consideration of the pastoralist and lowland development.

Mandefro Nigussie, State Minister for Crop Development at MoA, said at Addis Weg Round Table discussion on the development journey of pastoralist communities was held on Thursday January 14 at the Office of the Prime Minister Office and that the policy that existed for the past 19 years is under revision that needs contextual changes.

He said that there are some of the agendas that need holistic changes with regards to promoting inclusive agriculture and rural development on the consideration of irrigation, financing, land issue, sustainable development, natural resource development, mechanization and others.

“The policy has considered an integrated approach on social and economic dimension and environmental issue,” Mandefro, a crop production scientist, said.

Regarding pastoralist areas development plan, in the past the policy and effort had focused on the establishment of massive commercial farms by private and government on the pastoralist system.

Under the existed policy developments at the lowlands were not sustainable, which is one of the result occurred in the past, according to the sector expert.

Mandefro said that meanwhile necessitate attention was not given for lowland it is hope of the future Ethiopia, since it has ample resources including enormous surface and underground water that shall creating enabling environment for agricultural production throughout the year.

“All areas would not transform to crop production but there are areas that will be opened for fragile condition in the lowland area. The production would also consider fodder, which shall support the pastoralist besides hard currency revenue from export,” the State Minister said, adding that “Environment wise the irrigation development we have learnt from the past mistake was that the need of drainage system that needed for sustainable utilization of land that we follow in the upcoming policy.”

The discussion explored the existing livelihood of pastoralists, the benefits and challenges of the policies implemented over the years, and the ongoing efforts to ensure sustainable development and benefit the community.

“National and regional mindset on developing the sector with required investment is needed to change the way of life of the pastoralist community and the areas that is the future potential of the region,” the State Minister added.

“Meanwhile most of Ethiopian rivers sourced from highlands their potential is at the lowlands,” Wondimu explained that how the lowland is a good potential for agricultural development.

The GenaleDawa, Baro Akobo, Shebelle, Awash and the Rift Valley shall develop over four million hectare of land.

According to Wondimu, the Ministry has identified 15 major irrigation corridors and 10 of them are located in lowland areas.

Abdurahman Eid Tahir, Head of Irrigation and Basin Development Bureau of Somali regional, said that the policy for the pastoralist’s areas development mainly focused on as core on security and administrational issues.

Abdurahman appreciated the discussion that brings the pastoralist issue at the front and show the interest of the government to give encouraging attention for the community, the resource and social development in lowland areas unlike in the past, “we can learn from the past failure and achievements that supposed to be followed in the future.”

“One of the key issues forgotten in the past was that there was no undertaking of such kind of discussions. Such kind of dialogues indicates that we shall come up with effective policy formation for demanded growth in the stated sector and areas,” the regional Bureau head said.

He reminded that the livestock policy inception was began in the Emperor Era that mainly focused on settlement that still influence the policy developments up to today.

Citing the challenges like and positive aspects of pastoralist policies over the past decades, Abdurahman recalled that the settlement of pastoralists which was believed to simplify administration and to reduce security concerns, has not benefited the pastoralists.

The development activities that can be considered positive are the attempts to improve the literacy of the pastoralist community under alternative basic education initiative, animal health, and to enable the production of fodder for consumption within Ethiopia and neighbouring countries.

Honey Hassen, consultant on agricultural economy and one of the panelists, said that pastoralist sensitive development should be considered for sustainable development in the low land area.

“Settlements for the community shall apply but it must to account the management of livestock and put emplace systematic approach with the real understanding of the society and the situation,” she adds “when we plan for development is would be inclusive in all areas.”

Regarding to access to finance Mandefro said that the new policy has given attention and put a strategy up to the establishment of Agricultural bank to back the agricultural development.

Abdurahman recalled that access to finance was one of the bottlenecks for the sector development in the past that is improving now, “the opening up of Interest free banking is a good transformation in terms to solve access to finance for the Muslim community like in Afar, Somali and other lowland areas.”

Honey explained that pastoralists located in different areas have differing living conditions, structures and interests, and hence development plans and policies should consider these existing conditions.

Mandefro stated it is crucial to implement sustainable development options in a way that preserves the pastoral lifestyle of the communities and takes climate change into account. Cotton and wheat crops, for example, have been successfully harvested three times a year in pastoral areas.

The lowland covers 60 percent of total area of Ethiopia and up to 14 percent of the population included on the livelihood.

Abdurahman said that from the GDP contribution is up to 15 percent is contributed from pastoralist area and 95 percent of livestock and its product export is sourced from the stated areas.