The Ministry of Education (MoE) is changing the standards for people employed as lecturers in an attempt to improve the quality. Now their contract renewal will be depend on performance based on an assessment from students and their supervisor. They also must publish at least one piece of research.
This will not apply to academic employees who have served ten years or have reached the level of associate professor.
In other countries most university teachers are assessed every semester, according to Samuel Kifle (Ph.D.), State Minister for Higher Education. Previously the lecturers received a pension when their contract was terminated regardless of performance.
Currently, the Higher Education Proclamation states that a tenured academic can’t be fired unless they commit a serious breach of discipline.
“When the parliament returns from the recess the proclamation will be amended,” said Samuel. “When lecturers think they can remain in a job regardless of their effectiveness it negatively affects the quality of education.”
The new policy will reform other aspects of the lecturers’ jobs. It will allow, for the first time, graduates of alternative education institutions such as extension, summer, night or private colleges to become eligible to apply.
Samuel expects this to alleviate the current shortage.
“The grade requirement is not the only criteria. After institutions receive the non- regular applicants they can evaluate via writing, interviews, lecture demonstrations and other means. So it opens up competition for the positions,” Samuel argued.
University representatives agree meeting such standards is not difficult for non-regular and private graduates, however some smaller schools are having difficulty finding qualified lecturers.
“We called applicants once to apply based on the MoE’s criteria but no one responded. We are conducting a second announcement and if the response is similar we will be forced to reduce our standards because we don’t want empty classrooms, students have the right to learn,” said one academic vice president.
Capital spoke with representatives from two universities. Both said they had difficulty finding lectures that met the new standards.
The new directive raises standards in a number of other areas as well. Lecturers now must have a minimum GPA of 3.75, a Master’s Degree and an approved thesis. Each position must receive ten applications and if the university doesn’t get enough after the first posting they must make a second announcement.
It increased the length of the Master’s program to two years from one this is a reverse of what is occurring in other countries as many accept one year programs.
Ph.D. requirement will be regulated by the universities themselves. Normally the Ministry regulates lower degree requirements. 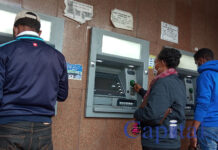